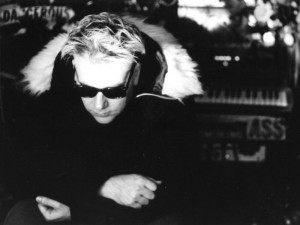 The Silver Tongue had the opportunity to talk to acclaimed drummer Martin Atkins.  On top of being a musician that’s played with the likes of NIN, Atkins is also the author of Tour: Smart.

Martin Atkins takes his 30 years of music, touring and business experience and combines it into a how to manual that gives musicians invaluable information that they couldn’t get anywhere else.

Senior Contributors, Sindy and Tyson caught up with Martin before his seminar in Atlanta.

SiN: Ok, so let’s just get to it. Now I tried to prepare for this interview by going back and reading about Martin Atkins, but I mean hell, you’ve done so much in the past 30 years that it would actually take me more than a year to read up on everything you’ve done, so we’re only going to get to cover a little of that today. But tell us about Tour: Smart.

Martin: Well I started playing drums when I was nine and doing gigs when I was 11 so, I’ve been in a bunch of bands and toured the world. So, my interest in this aspect came from not a academic view point or a business view point, but from a artistic standpoint where bad business or bad marketing or the lack of any marketing affected how good a show was. But just in terms of how many people were there or how big the sound system was because one of the first things that get cut when a show looks like it’s going to do badly is anything that is on the rider to make the band and crew comfortable and anything that cost money like lighting, scenery and sound systems. So, i started to pay attention to the things that made a difference to my experience as a performer and then I started to put package tours together and you know once you start to juggle five bands and three buses, 42 shows in a row, some things start to get easier. And I’ve been doing that for a long time.

And then five or six years ago I decided to go up here  to Columbia University in Chicago and get some interns for these huge tours that we do and it was while I was there presenting to the faculty to give a reason to send interns down to my office that they asked me to start teaching the business of touring and that’s when I found out there wasn’t really a book. So, I started to put materials together for class and then that didn’t feel like it had enough of the sex, the drugs, the human drama, the sacrifice, the stress, the leap of faith that is the reality of touring so I spent another year putting all of that stuff together and that’s what led to the book.

Martin: Let’s say you’re a solo act in Atlanta. Then probably the biggest mistake you’re making, that is if you’re not touring then you’re overplaying you’re local market. And that’s something you have total control over. And it’s all great information. So, you don’t have to do a North American tour to use this book. There are great marketing tips in there for your local market and for starting this process of involving your audience and growing your band.

SiN: Well I’m guessing that not knowing how to tour can be a nail in the coffin for a lot of bands, whether it’s small local bands or bigger bands. How many bands have you seen break up just because they were on tour and had no idea what they were doing?

Martin: Well that happens a lot, but to the complete other end of the spectrum I saw a band that I worked on for four years, had about 80,000 and 3 albums of my time invested in them and they broke up over a plastic yogurt spoon or the lack of a plastic yogurt spoon. People just don’t understand how hard it is to tour, how stressful and how paying attention to some very small things can make a big difference. And then I think that when bands go out on the road they don’t realize that it’s warfare and they don’t treat it like it’s warfare. And they need to be reminded that it’s not just that bands break up and relationships perish or people’s credit scores perish when a band is on the road. People actually die on the road and it doesn’t have to be just you and your band driving badly. When you’re on a highway it could the driver of a UPS truck that has a heart attack and slams into you on the highway or a bridge could collapse. Crazy things happen so people need to strategize and be more careful.

I have bands in Chicago whose idea of a strategy is to go to the West coast and that’s just insane. So, there is definitely a need for some level head clear thinking with the understanding that this isn’t a field in which level headed clear thinking is usually a priority.

SiN: Now I read you were a columnist for Suicide Girls. That’s interesting. I don’t know a whole bunch about Suicide Girls, I know some, and Tyson knows more.

Tyson: Yeah, well I know as much as my girlfriend is a Suicide Girl and she has a few shoots coming up. It’s a alternative modeling thing. I know their website which I’m guilty, not a member of because I’m a starving artist like everybody else.

Martin: It’s a pretty cool site with people expressing themselves in different ways.

SiN: Are you currently working on another album? You’re still a working musician.

Martin: One of the things I still love. This year is the 30th anniversary of the first album I played on “The Metal Box”, I co-wrote one song with Public Image LTD. Two years ago I made my first trip to China and I made a album in a studio in Beijing with some traditional musicians and my peeps and a bunch of indie pop musicians from Beijing and Tibetan singers and it’s just amazing and I really love the fact that I’m still in love with making music 30 years after I started. And I just finished a new album for my album Pigface. I don’t know if I’m going to tour. I have four kids now. We might tour later on in the year.

SiN: I have noticed that a lot of bands fail because they’re to quickly to want to go on tour without decent material or any material.

Martin: Well that’s just crazy. I mean it’s crazy for so many reasons. A band needs to do everything. They needs to be doing shows to develop those skills. They need to be writing songs, more than a albums worth of songs. Because one of the easiest ways to have 10 great songs on a album is to write 20. And you just pick the 10 best. That’s really simple. Some bands I know will write 7 songs and go to the studio and dash off 3 songs as they go. But a band can go out there and start playing and have a EP and then a album and make their own T-shirts and that’s important, not to make money, but if you have a good show you need to sell someone a t-shirt or sell someone a t-shirt just as a reminder. That’s what merchandise is really.

Merchandising and having a range of things to sell or give to people is just a part of fueling your audience and creating an audience base. So, if  you play in Tampa and you drive down there from Atlanta, and you can’t get down there for another 12 weeks, in the meantime, five people that bought the handmade shirt you created have washed that shirt 6 or 7 times and have looked at your bands logo and thought about your show as they folded it up, put it back in their drawer. So, when you come back they are more likely to come back and see you. It’s all of these tiny things that make a difference. It’s a lot of little things but it’s easy.

Tyson: Well that’s one thing, let me back track it a bit. I know we are attending the seminar and it’s on behalf of Mr. Atkins, but I would like him to give me a little more information as a working musician who’s going to attend and what I should expect from it.

And I think that’s one of the things that I bring, is a look at anything that’s happening right now. And this is a business that is changing everyday. Also an idea of what everyone is doing and then I can kind of guide my presentation to whoever’s there. If there is a bunch of bands that are going on the road next week not only will I address some stuff specifically to them, but I’ll probably hang out and talk to them after the event and give them some specific advice.

Tyson: Do you think that merchandising is more important for more than just promotional purposes? I’ve always viewed it as the main money maker.

Martin: You hope that people already have your record. So not only do you need more than one t-shirt because the question has to be which t-shirt are you going to buy, the question cannot be if you’re going to buy a t-shirt. But you also need a live album or some remix of some songs or acoustic versions of 3 songs on an EP, so the person that already bought the album has something else to buy. And it’s not just about the money; it’s about fueling the relationship. 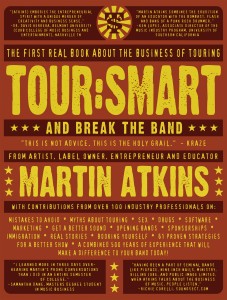