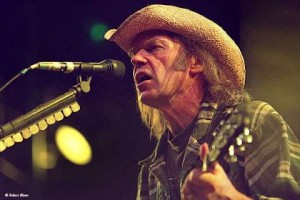 Neil Young, one of the most influential and important artists of the rock era, has performed with top bands and musicians over the course of his 50 year career.  This year, however, Young will go solo for a series of acoustic performances across the nation.

The iconic singer/songwriter/guitarist has confirmed just four dates for this spring’s Twisted Road Tour, with more expected to follow. As it stands now, the itinerary opens with a March 26 engagement at Louisville Palace Theatre in Louisville, KY, followed by additional gigs on May 29 at Fox Theater in Atlanta, GA, and May 30 at the Memorial Auditorium in Spartanburg, SC.

Initial ticket sales begin Saturday, March 27. According to event listings on www.Ticketmaster.com, tickets for the May 26 show in Louisville will range from a low of $85 to a high of $245.

Prices in other markets will be similar. Spartanburg Spark places face values for the May 30 gig in the $80 to $121 range, while music blog Nashville Scene sets tickets to the June 1 show within the $92 to $127 range.

Throughout the upcoming tour, Young will play acoustic sets of his classic songs, as well as newer tracks from his repertoire. The Twisted Road also features Bert Jansch as a special guest. Jansch, the Scottish folk musician, who Young has credited as an influence, will open each performance with his own solo set.