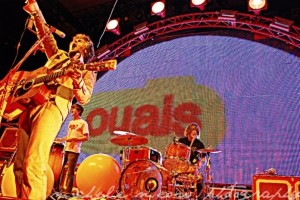 In a recent interview with Billboard, Flaming Lips front man Wayne Coyne revealed that he was in the process of working on a follow up to his film Christmas on Mars. Coyne will be using primarily family and friends again, though mentioned a possibility of trying to get real actors for the project. Fans shouldn’t expect a release anytime soon, as Coyne did state, “I think everybody would be relieved if it all got done in six weeks and we could say, ‘Look at that!’ “But because I get to do it with people I love and it’s my art, I don’t care how long it takes.”

For those looking for a more tangible release from the Flaming Lips this year, the band has a physical release of “THE FLAMING LIPS, ALONG WITH STARDEATH AND WHITE DWARFS WITH HENRY ROLLINS AND PEACHES DOING ‘THE DARK SIDE OF THE MOON’”  available for sale on Limited Edition vinyl beginning April 17th 2010, National Record Store Day. The CD version will go on sale on May 4.