Hank Williams Jr. stated during his performance – “I play what I want, when I want, and with who I want” . As such it was a pleasure to have his spring 2010 Rowdy Friends tour make a stop in Georgia at the Gwinnett Arena on 04/24/10. In turn, thousands of loyal fans packed the arena for a night with the godfather of outlaw country music and a few friends of similar genre and attitude in support. 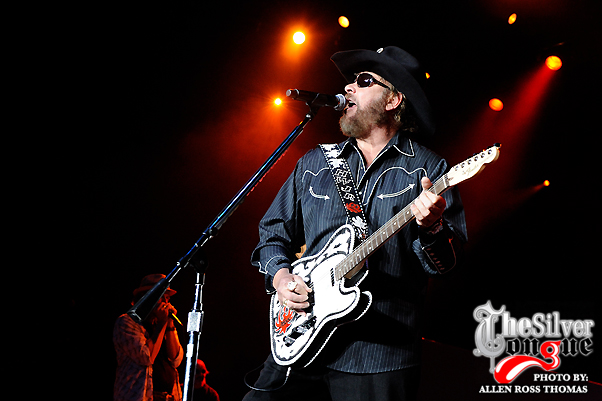 Jamey Johnson opened the night delivering a transparent performance clearly relevant to the crowd in attendance. Johnson’s stage was commensurate with his laid back and open style as he delivered thought provoking and relevant songs applicable to today’s times. Opening the set with “High Cost of Living” established immediate rapport with the crowd as Johnson continued with several songs from his forthcoming album including “Can’t Cash my Checks” , “Back to Macon”, and “Even the sky is blue” receiving high praises from the crowd. Johnson and band completed their compelling set with hits and crowd favorites “In Color” and “Give it Away” with Johnson in his humble and stoic manner slowly walking off stage with a gracious wave to the crowd. 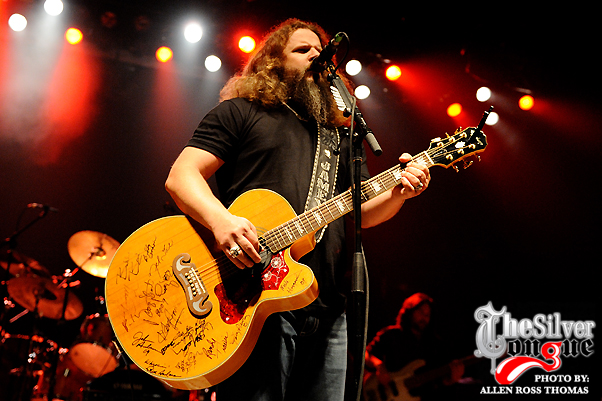 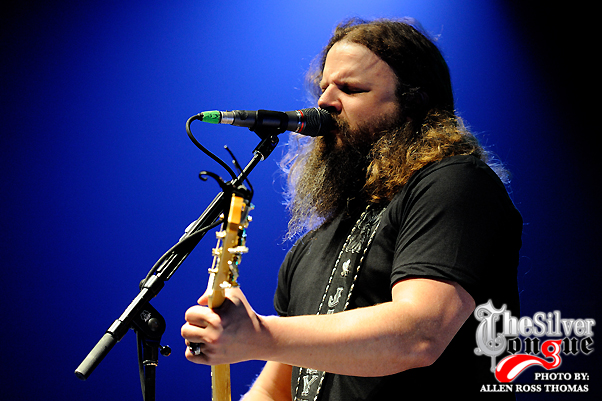 Eric Church and band then took the stage delivering a highly energetic set opening with “Ain’t Killed Me Yet”, “Two Pink Lines”, “These Boots”, and “Guys like Me” . Church’s performance resembled that of a rock show generating contagious energy bringing the crowd to its feet at numerous points within the set. The performance continued with the band shredding through a balanced mix of hits and deep album cuts including “Pledge Allegiance to the Hag” and “Before She Does”. Bringing the party into full swing Church delivered crowd favorite songs “Smoke a little Smoke” and “How About You” to thunderous applause before closing the set with the slower paves crowd sing along “Love Your Love The Most” garnering a standing ovation. 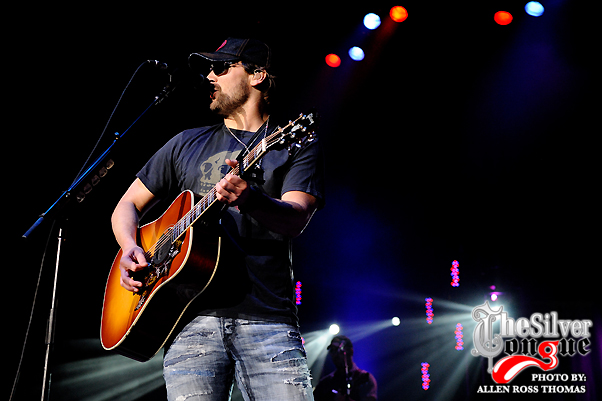 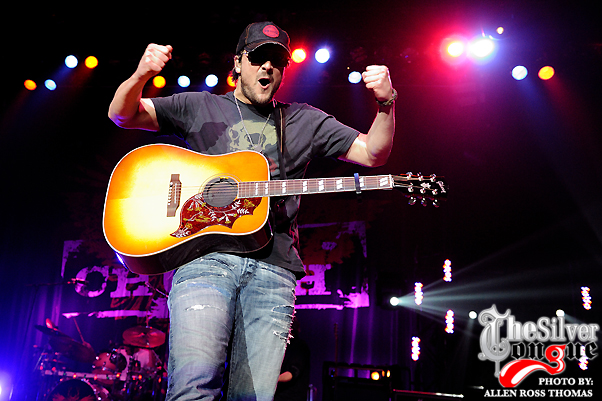 Headliner Hank WIlliams Jr and band took the stage opening their set to thundering cheers with the self titled “My Name is Bocephus” bringing the arena to its feet and into a literal frenzy. The band continued with “The Conversation” and “Dixie on my mind” – one of many Georgia country anthems that would come throughout the set. Next, the band went into Skynyrd’s “Working for MCA” to crowd cheers and demonstrating the bands versatility and Hank’s southern rock side. 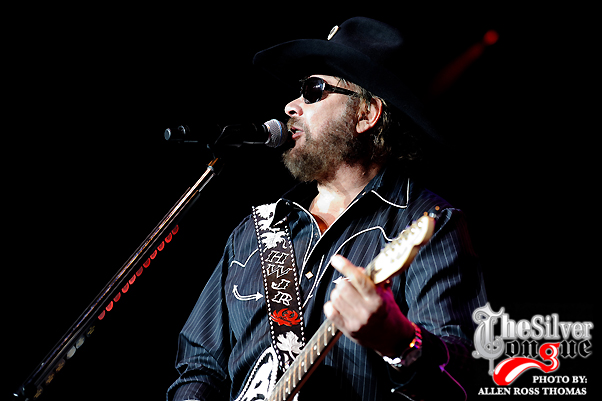 A quarter into the nearly 2 hour set, the band left the stage as Hank transformed the packed arena into an intimate local bar as he solely took center stage with guitar and piano to deliver a set of original hits and influential country and southern rock classics intertwined with personal tales of the artists life and upbringing. This began with “All My Rowdy Friends (Have Settled Down) on acoustic followed by Hank moving to piano to reminisce of growing up in the Williams home around the likes of Johnny Cash and Jerry Lee Lewis as he delivered “Whole Lotta Shaken” on piano before returning to solo guitar performing classic hits and crowd favorites “Outlaw Women” and “Dinosaur”.

The solo performance continued with a medley of classics from himself, family, and friends including “Tear in My Beer (Hank Sr)”, “Feeling Better”, “Good Ol’ Boys (Waylon Jennings)”, “I walk the line (Johnny Cash)”, and returning to “All My Rowdy Friends (Have Settled Down)”. Further commentary from the artist demonstrated Hank’s inate ability to speak to an arena of fans yet connect with each person on an individual level. A moment of silence soon revealed the opening chords of a “Country Boy Can Survive” sending chills over the arena floor as he addressed the current state of America and again demonstrated his ability to connect with his fans. As he often does with his most commonly known classic, the lyrics where altered at times to “America will survive” giving the crowd inspiration and the artists take on the current state of affairs of our country. 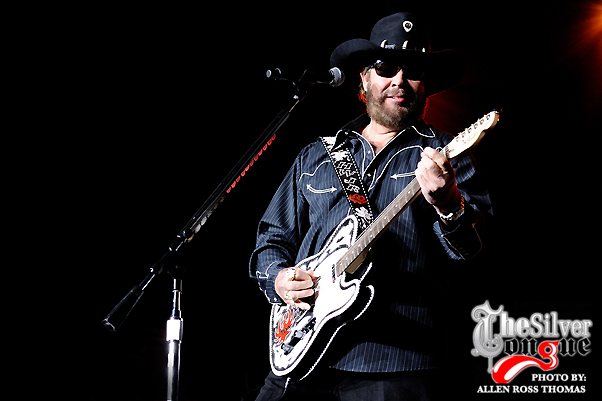 The band returned to the stage as Hank changed up the setlist of the night to sing his father’s “Lovesick Blues” to an elder woman friend in the crowd who he noted as the Rowdiest woman in the arena – nice personal touch. With the band now joining in, the party returned with an energetic performance of “Born To Boogie” leading into Waylon Jennings “Lonesome On’ry, and Mean” before blowing the roof of the joint with a rocking version of “All my rowdy friends are coming over tonight”. Indeed. 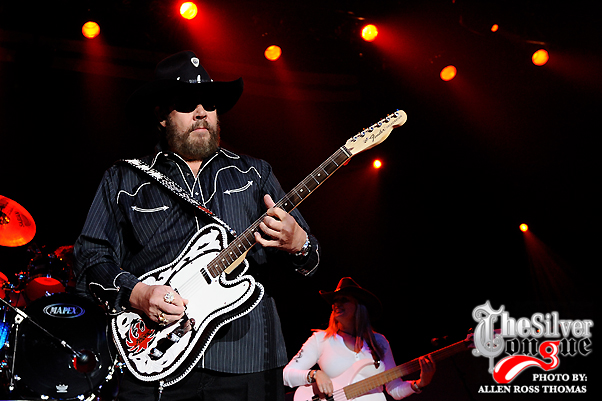 In classic Hank Williams Jr. form, the band had one more song in store for the audience as “Rowdy Friends” Jamey Johnson and Eric Church joined the living legend on stage to end the night with the classic “Family Tradition” with backing vocals provided by all in attendance.

Southern born and raised I grew up on the rock n’ roll side of the track. As I’ve aged my musical tastes have expanded and refined as I’ve come to realize the relevance of classic country music to our lives and the damn fan party that goes along with it!