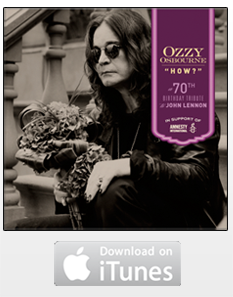 Ozzy released a cover of Lennon’s “How?” (from “Imagine”) today via iTunes to mark the occasion and to benefit Amnesty International.
With John Lennon 70th birthday approaching this weekend ,Ozzy Osbourne pays tribute to one of his musical heroes by releasing “How?” on I-tunes for Amnesty International.

Osbourne has always declared his love for The Fab Four. “To me, they’re the Mozarts of our time,” said Ozzy in 2004. “The Beatles were the only band in rock ‘n’ roll history to go from a f**king boy band to a psychedelic rock band, and it was all accepted because Lennon and McCartney wrote such great melodies.
Lennon would have been 70 on Saturday; he was shot to death in December of 1980 in front of his New York City home.

Ozzy has also covered the Lennon tracks: he recorded “Working Class Hero” and “Woman” for his 2005 release, “Under Cover” (which also included a version of The Beatles’ “In My Life”).