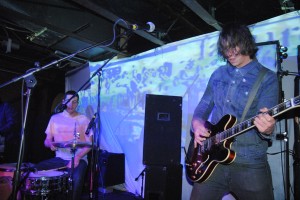 From the middle of the sardined and sweaty Drunken Unicorn room on a wintery Atlanta Friday night, the sound wall behind No Age guitarist Randy Randall looks like a garage kid’s dream come true. It’s a could-be 5150 full stack (it’s not) sandwiched up like a vertical ‘V’ to an Ampeg SVT full stack beneath a sideways Sunn combo. In unison, they spit out the No Age sound that I came to expect.

Randall, drummer/vocalist Dean Spunt and a touring stage mate on the far left of the stage perform against a chaotic backdrop. The scenescape of color and static and horizontal lines gives the show an artistic aesthetic that might have otherwise been unnoticed by the fans and other, simply curious paying patrons.

No Age begins, appropriately, with “Life Prowler” the first track off of Everything in Between, the wonderful record that made my indie tops list for 2010. This and the next few tunes are presented humbly and artistically, with lots of ambient transitions between them and little talk. Those transitions carry on like crashing static waves panged with guitar feedback that bleeds into and out of them. I notate that Spunt’s vocals are too low about the second or third song in but eventually, subconsciously, adjust to the sound and come to understand even the lyrics that I don’t already know.

As much as I like to deviate from standards, the single, “Fever Dreaming,” really hits me. Followed, as it is on the record, by “Depletion,” I get stuck in a Zen moment of airy drums and moving guitar progressions endeared by atypical chords with strings hammered on in atypical places. This movement, properly seated mid-set, woos me and seemingly the rest of the evening turnout. The sound recalls Some Velvet Sidewalk to my attention, and then the rest of the set spirals into other, more cliché early Nineties inspirations.

It’s really as if No Age’s set is divided into two distinctive parts: the former more artsy and experimental, the latter more traditional and familiar. Empty, thrown cups and PBR cans break the clarity of chaos and sound and sight as the band moves to the second half, and that makes it feel punk rock but, otherwise, no. It’s a clustering of filling; that’s all. By 11:35 pm they’ve played so many songs. It’s a time loss, but not much time has passed. It’s an early show, making for a dream feel inside the warmth of a crowd of lots of taller guys.

The live bass makes a time keeper if any kick gets lost in the noise track; we can’t know for sure whether or not that’s happening. No Age goes on with these almost serious songs and then kicks back in heavy with a drum driven one. Towards the end, a single note, delayed guitar strum rises with the again push of sound whale, who swims by between every couple of tunes. Then they crash into overdrive, Randall jumping vertically while the bassist bends down, over almost. Two far apart worlds they are, throwing sound at each other from opposing stage corners.

The live show gets looser and more relaxed as the end nears. Progressions with near shout, but noteworthy vocals, drag it to experimental art rocker territory (oddly, this means tinges of Broadband and Erase Errata for me). Retarded snare triplets over sustained chords help the vibe. Then, cyclically, the show moves to almost ‘pretty,’ droning guitar that’s accompanied by a blue, blank screen.

Besides the second half of No Age’s set seriously switching vibes, it’s also more fragmented than the first. There are none of those huge noise transitions. It’s almost as if Randall and Spunt are checking instrument levels between songs. Towards the very bottom of the night, I feel like I’m watching a segment from “1991: The Year Punk Broke.” There’s a definitive Sonic Youth-ness that comes radiating through, and it continues until the sound stops.

On the second to last song, “Shed and Transcend,” people emerge in the visual scramble of a screen behind them. It looks like people dancing backwards in slow motion, but the more you look at it the more the understanding that they are, in fact, running in reverse occurs. That blue screen returns for the last song, “Miner.” It’s an attitude anthem that speaks for the evening, followed closely by “Boy Void,” which is half-ass featured as an encore, but without the band first leaving the stage or even taking more pause than they have between other pieces.

All in all, I enjoyed the sound and especially the visuals. As promised, the show is over by midnight. Note to self: next time dress tall.