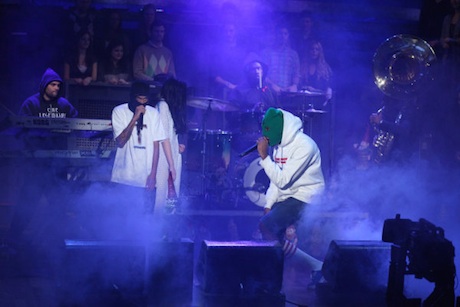 Controversial rap collective Odd Future recently tore down the barrier between horrifying metal and rap during a performance on Late Night With Jimmy Fallon.

The Los Angeles group is growing in fame thanks to darker-than-metal lyrics and a frightening live show. Performing their 2010 single, “Sandwitches,” was frontman Tyler, the creator, and cohort Hodgy Beats on the Feb. 16 edition of the late night talk show.

The stage filled with smoke as the cameras zoomed in on close ups of lawn gnomes standing around the stage. A girl wearing a hospital gown roamed aimlessly as the two hooded rappers intoned their forceful language from behind ski masks with upside down crosses on their foreheads.

“Screw the mask I want that girl to know it’s me” said Tyler as he ripped off his mask and galloped around the stage in a manic frenzy of energy and aggression. The two screamed in unison “Wolf gang, it’s the wolf gang!” as their uncontrollable convulsions turned violent.

Odd Future are part of a larger rap collective known as Odd Future Wolf Gang Kill The All, or abbreviated OFWGKTA. They have released several mix tapes and solo albums which are available for free on their website.

The group’s fame has risen steadily premeditating their first mainstream TV performance on Fallon. Blogs and magazines including The Rolling Stone have been rampant with praise for their unorthodox style that is sometimes labeled horrorcore, although the group dismisses this label.

The Fallon performance displayed a true rock ‘n’ roll aesthetic that many other artists – metal included – try and fail to achieve. More akin to the raw energy of punk than hip-hop, Tyler blatantly dissed mainstream rapper B.o.B in the recently released video for his song “Yonkers” which features striking imagery of him eating a cockroach, vomiting and ends with him hanging himself.

Moreover, the group’s imagistic live show drew its inspiration from dark themes such as mental hospitals and the occult that were only explored previously by black and death metal. Never before has this raw aesthetic of metal been so smoothly infused into caustic rap.

Odd Future News: Tyler the Creator Hit with a...