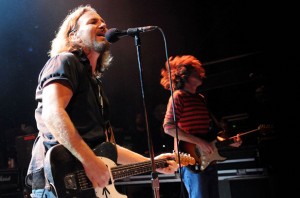 Eddie Vedder will kick off  a month-long U.S. solo tour in June in support of his  forthcoming solo album Ukulele Songs. The 17-date trek will kick off on June 15th at Providence’s Performing Arts Center and wraps up on July 15th at Seattle’s Benaroya Hall. Special guest Glen Hansard (The Swell Season, The Frames) will join Vedder on the road.

Vedder’s solo album, Ukulele Songs, will be released on Tuesday, May 31st through Pearl Jam’s Monkeywrench Records. Ukulele Songs is a collection of original songs and covers performed by Vedder on ukulele. The first single from the album, “Longing to Belong,” is available now digitally.

Tickets for all shows go on sale Friday, April 1st.