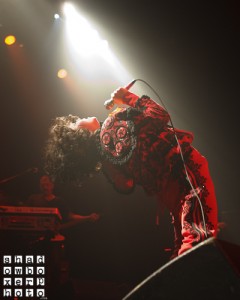 This show marked one of those rare instances when a mega ‘Charlie Foxtrot’ turns into a great night. I won’t go into it all, but will say, in retrospect, it would’ve been a regular night of reviewing if I hadn’t hyped the thing up in my mind so much. I am a CSS mega-fan, see, and there’s just about nothing that could or would have stopped me from making that show. I wasn’t down in the front screaming at Lovefoxxx’s face all night, though. And I didn’t faint or cry when I got to shop talk with Luiza – shamelessly explaining how her guitars on Donkey pretty much singlehandedly served as external influence for my guitar approach on my own band’s record last year, only to have her verbally deliver to me more detailed, specific information about what gear she used to create that sound. Frankly, I wanted to enjoy the delivery of those beloved tunes (and some new ones) from a perched seat where I could see it all. And that’s what Center Stage provided.

I missed the opener and beginning of Sleigh Bells’ set [see Charlie Foxtrot above]. Don’t get me wrong – if CSS weren’t on the bill, I would’ve still given Sleigh Bells my night. Their tunes are simple, distorted, thumpy and hooky. They’re a two-piece band (if you read anything I ever write, you know how that gets bands marks in my book). They’re cute and creative, and have given pop a new, raunchier sound. Seriously, what’s not to like? 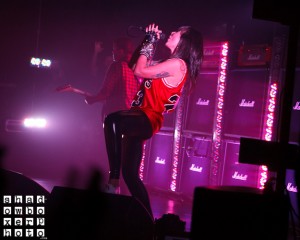 Sleigh Bells basically ran the gamut of tunes off Treats, last year’s rightfully well-received LP. The lower-than-typical frequency hand claps of “Tell ‘Em” rang clear and separated from Alexis Krauss’ vocals as the heavily distorted beats beneath threatened to shake the building. Sonically, everything about Sleigh Bells is amped up live – the beats are more distorted, the guitars are more bassy. Vocally, except for the programmed backup tracks, which sound exactly like the record (probably from whence they came), it’s really different. In person, Krauss morphs from spunky, potential BFF to 90s-esque riot grrl on a mission. Her and guitarist/band partner Derek Miller command the stage together, though Miller is busy pushing ballsy guitar wails through an undisclosed number of the Marshall 412 cabinets behind the two. Krauss is an outspoken spokeswoman onstage. Most of her lyrics are worth belting, and so she does.

“Infinity Guitars” seems to have more programmed backup vocals than some of the other tunes. Krauss seems to scream for lyrical accompaniment from the crowd more towards the end of the set. Bouts of “What?!” are replied with unison “Uh Huhs” and “Ah Ah Ah’s” as the night rolls in deeper. Krauss is pouring water onto the top of her head as “A/B Machines” comes in. Side note – Miller’s guitar and Krauss’ head made an unrehearsed collision earlier, leaving Krauss bleeding but trekking on through the set as if nothing happened. Though she might be suffering later, “A/B Machines” (one of my favorites) is all screams. 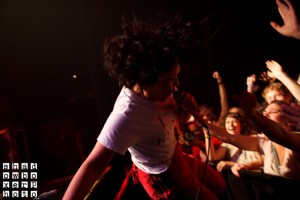 I like Sleigh Bells, but it’s CSS I’ve really come to see. I dive in for a bathroom break between bands, apparently alongside every other female in the building. I get to listen to teenage girlies bitch about how blasphemous it seems to them that Sleigh Bells should open for this ‘band that nobody’s ever heard of,’ and have to cut myself off after a few short, snide retorts. It’s a great bill, I think, but know that CSS’ classy uniqueness – the kind that puts them up on a high shelf in indie music snobs’ heads – is surely being overshadowed by Sleigh Bells’ mainstream radio pop appeal. It’s weird and sad and, duh, Atlanta. I live with it, knowing that if those kids stick around past curfew, they’ll be won over instantaneously.

CSS walk out nonchalantly and pick up their instruments. They’re in jeans and t-shirts, save Lovefoxx, who rocks some red matador wear. They break into “Art Bitch” right off the bat, and it’s as if a switch is flipped in Lovefoxxx’s head. Her vocals are clear, though I’m biased by knowing all the lyrics, and bassist/keyboardist Adriano Cintra warms them with thick backups. They hit “Off the Hook” next, and I’m trying to pay attention to what the fill-in touring drummer is doing, though his parts are less interesting to me than what’s coming from stage left, where Luiza and Adriano reside. 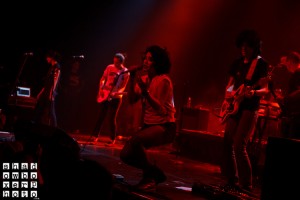 “Rat is Dead,” my very favorite CSS tune, is up next and, again, Adriano is filling some unknown space with warm backups – these are ones that appear different from what I’ve heard him singing on the record a billion times. They’re the same lines maybe, but with a different approach. Lovefoxxx tears off some of the clothage on the top half of her body during this one, and hesitates zero percent before lunging into the crowd, where she gets lost there – the first of many times during the evening. When she comes back up, feet first always, she mentions having played the Drunken Unicorn during CSS’ last stint through the Southeast. The crowd remembers that, and not much else is mentioned of it from the stage outside the brief deliverance of association.

I’m thrilled when keyboardist/guitarist Ana Rezende, who’s wearing an L7 shirt, for the record, brings out a red Roland keytar. CSS dives into “Hits Me Like a Rock,” which is a new tune. I like the cadence of it, enjoying my opportunity to get a taste of what the new record, La Liberación, holds. The new tune is followed closely by “Music is My Hot Hot Sex,” which is when Lovefoxxx rips off her matador-ish trousers, exposing cutoff daisy dukes, which seem like a cool matchup to her white T. The band all seem to shift and loosen up in stages with her. Guitarist Carolina Parra moves around more, reminding me of some Courtney Love spunk as she’s pacing around like a crazy girl with that keylime green guitar (even though hers is not a Rickenbacker, it adds to the stage color scheme and attitude). The thing about CSS is that they have some fabulous gear, but they don’t flaunt it and it doesn’t seem imposed upon them. Parra runs through a half stack while Luiza Sa plugs her Jaguar into some sort of simple deluxe or twin combo to get that signature, overriding, trebly indie sound that I crave so much. It seems to be a lot about personal preference – like this band’s sound really did come about serendipitously. 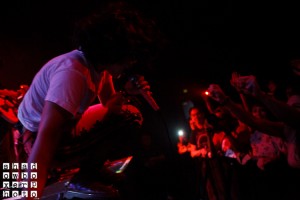 Another new tune follows. Lyrically, this one grabs me – something about, ‘lipstick, short shorts, short skirts, baggy shirts… in the big city… nothing hurts.’ Lovefoxxx almost falls forward into the crowd when the front monitor tips at the whim of her full weight. She catches herself and continues to push out those lyrics pretty clearly. I’m surprised at how clear and concise (not muddy) all the sounds are. I knew going into the show that understanding the new songs’ lyrics would be a testament to the sound and mix. At this point in the set, Luiza, Ana and Adriano are all playing keys. The synth sounds are fantastically full and rich and separated out front. Luiza goes back to guitar for “Move.” Adriano contributes more beautiful backup vocals.

Lovefoxxx thanks everyone for supporting the U.S. tour and the band tips into “Alcohol.” At the end, and for about the forth time, the wonderful frontlady comes back up and onto the stage late – after the rest of the gang have started the song – and feet first. “This is our last song,” she laments, and they play “Reggae All Night,” which is probably my least favorite of all. Luiza playing a standalone cowbell on this one makes it worthwhile; she dances and throws her skinny body into it. Also worthwhile are the melodic lines that she’s contributing via a small Roland synthesizer (not midi controller). Research reveals it to be a Micro Korg – the mini version of the analog MS2000, which is known for delivering these to-die-for synths. Ana has the keytar back over her shoulder during this, adding graciously to the ‘electro’ part of the band’s precise description. 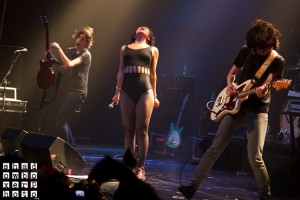 CSS play a perfect, three song encore. Lovefoxxx changes superman-fast and graces the stage now in a black leotard/bodysuit that’s hidden for a little while beneath a red cloak that drapes around her small shoulders. The cloak comes off during the second song, and she seems more energized than before – diving off stage again to crowd surf, and doing flips onstage when she returns. She exits with a cartwheel, which has everyone in the room smiling, screaming and applauding. Once again, the girls and boy from São Paulo let us know why we love them so much. They’re just so damn fun!

1. Go out and buy the new record, La Liberación, when it comes out on August 29.

2. Food for thought – Luiza and Lovefoxxx both unofficially made note that another U.S. tour is on the books for the Fall; it’s October for Atlanta.

3. The CSS blog is plain (design-wise) and funny and just as quirky as they are; check it out here.