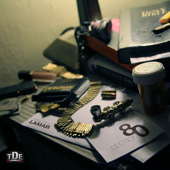 The amount of hip hop that comes out on a daily basis is almost impossible to keep up with. New artist emerge every day, old artist release music on the sly, and it’s a hassle to stay up to date.  Here you will find incredible albums to support via iTunes, and free mixtapes you can download.

Kendrick Lamar-Section80: Easily one of the most anticipated releases of this year. For those that have been sleeping under a rock, Kendrick Lamar is one of the rising stars representing California (Compton), and the overall west coast hip hop movement. Everything this kid touch is gold, and he’s even managed to catch the attention of  veteran rapper and producer, Dr. Dre. His lyrical content isn’t for the radio, but it’s a must have for anyone that wants a taste of great Hip Hop and phenomenal  music.

Dom Kennedy-II – From the Westside, With Love: Another West Coast rapper making extremely big noise at the moment is Dom Kennedy. This is his 6th solo album release and the anticipation for this project has been huge. Dom’s ability to tell stories that the masses can relate to is why he has such a large fan base. If you need something to just chill and vibe out to this 17-track album is perfect for you.

Big  Sean-Finally Famous The Album: Kanye West’s young protege finally releases his debut album after many setbacks. With a number one single with Chris Brown, a star studded line up of guest, and undeniable talent to not only rap, but make music that your ears will appreciate, Finally Famous should definitely make it into your hip hop collection.  Do yourself a favor and grab this album. No one wants to be the last person at the party.

Curren$y-Weekend At Barnies: For the last few years Curren$y has been a strong force in underground hip-hop network, from his mixtapes to his pilot-talk series, Curren$y doesn’t disappoint. Weekend At Barnies is no exception. Women, controlled substances, cars, and preaching the JET Life are the subject’s touched on this album, and if any of those four appeal to you then your iPod needs this album.

Cory Gunz: Son Of A Gun: Hosted by Dj ILL Will & Dj Rockstar, Cory Gunz, one of the more talented members of Young Money drops his latest mixtape. Regardless of his t.v show, and being manged by Nick Cannon, Cory has always been very nice on the mic and it won’t hurt to give it a listen.

Jean Grae – Cookies Or Comas (Mixtape): Hosted by DJ-Drama, this is Jean Grae’s first full-length project since 2008. I’m not even gonna beat around the bush here. Jean Grae is a better rapper than your favorite female artist. This is 10 times better than Pink Friday, and she’s in a league that Nicki Minaj will never reach. That’s no hate. This is a mixtape that you shouldn’t pass on, plus its free.

CyHi Da Prynce – Royal Flush 2 (Mixtape): GOOD MUSIC signee, Atlanta’s own CyHi Da Prynce dropped Royal Flush back in 2010 and the response was pretty positive. Now in 2011 he follows up with part 2, and once again critics pretty much agree that this guy has a future in hip hop. Check it out and enjoy!

The Weeknd: House Of Balloons :  To my surprise there are people still in the dark about this very talented artist out of Toronto. Even though he is new to many,  Drake has decided to take him under his wing and they’re making music together. So if you liked the recent Drake songs (Marvin’s room,Trust Issues) you will not only love The Weeknd,but love this mixtape. His name will be everywhere soon enough.