Concert Review: My Jerusalem at The Lexington 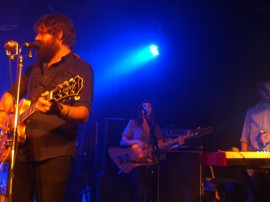 Is it fair to call My Jerusalem a super-group? I’ve always thought so. Fronted by Jeff Klein and featuring fellow Twilight Singers alumni Dave Rosser, the band also includes Rick Nelson of the Polyphonic Spree, Cully Symington of Bishop Allen and Ashley Dzerigian of Great Nothern. To me, the prospect of these people sitting down in a room together and having a chat is exciting enough, but the prospect of them actually playing a show? Colour me ecstatic.

The Lexington is a fairly small venue. Street level it’s a (fairly lively) pub, with the stage itself being upstairs. It’s a pub venue, to be sure, albeit a very nice one. There isn’t an elaborate lighting system or really a huge stage, but at the same time I think this works in its favour. It means you get close to the action, and justifies their advertising of an “intimate gig”. There’s plenty of room around the stage to stand, and towards the back of the room and nearer the bar there are sitting areas. The crowd seemed all too comfortable when I arrived with staying seated in the back/middle of the room, making me fearful to be the first jerk to stand near the stage and obscure everyone’s view. Though, to be fair, sitting seemed appropriate for the two opening acts.

First on stage were folk band The Garden City Project, and while I was only able to catch their last few songs, they seemed like a band that really enjoyed performing. Their songs were fun and simple, and though he never took the foreground on any of their songs, I can say I was particularly impressed by their mandolin player.

The second act on stage was Sweet Baboo, or if you oppose stage name, Cardiff-born Stephen Black. He played a sort of morose, awkward character between songs, and consistently was able to make his audience laugh. It was quite an earnest performance, too – he introduced each of the songs he played with an appropriate backstory, and took a great interest in narrating to the audience. All this being said, his music wasn’t really for me. I’m not strictly against white-guy-with-acoustic-guitar music, but a lot of his songs had a either faux-jauntiness to them that grated after a while, or followed a 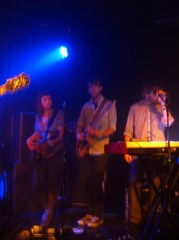 The Lexington wasn’t the kind of place that made for grand entrances, so the band just sort of walked on. Jeff Klein (like Pete Silberman in my review of The Antlers at Screen on the Green) looked out towards the largely sitting or far-away crowd, and was not happy with what he saw. I think after The Garden City Project and Sweet Baboo, the audience may have been a bit too frigid for My Jerusalem – certainly for Mr. Klein’s taste. He casually walked up to the microphone and said (nay, ordered) “Come closer. If you all want this to be a rock show, let’s make it a rock show”. The crowd obeyed.

They started by playing “Remember Everything”, which worked much better as an opening song than I would have expected. I see now it’s a smart move to open with a song which really highlights the trumpet and trombone – it makes for a triumphant introduction.

Of course, before the band even arrived on stage the words “Sweet Chariot” were fluttering through the air. When they finished “Remember Everything”, the band wasted no time breaking into it, and if I may be blunt, it was stupendous. It’s one of those songs that’s impossible to skip – it captures an audience and demands your devotion. In “Sweet Chariot”, Klein demonstrates a great vocal range; easily switching between soft croons and refined bellows, all the time being perfectly complimented by the building drums and excellent fanfare of the brass. And, may I say, they threw themselves into it live. It was a particularly energetic performance so early in their set, and it was a song that was impossible to not be completely pumped after hearing it.

The band followed with “Gone for Good”, which I can say sounds very different live, but still felt like the same song – a slow, mellow cool-down that not only felt like it was earned after “Sweet Chariot”, but acted as a great resting point before the equally-animated “Shake the Devil”. This was the song where it became apparent how much the members of the band functioned so well as a group. Throughout the gig, band members confidently switched instruments, playing off each others strengths. We saw trumpet player Matt Bricker and trombonist Jon Merz moving to keyboard, and keyboardist Evan Jacobs moving onto backup guitar, and on every song they play Jeff Klein provides a conductor-like lead, with Ashley Dzerigian and Kevin Bybee 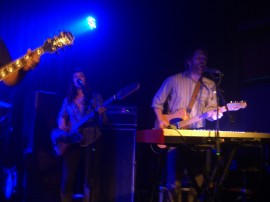 consistently delivering a strong foundation. As fantastic as the band were acted as a unit, “Shake the Devil” was really when Jeff Klein got to flex his muscles as the charismatic lead. He put down his guitar when the song began, and lead the crowd into stomping and clapping along with the percussion, making sure to get as many people involved as he could. When the song got into it, so did he, bringing to life the repeated lines of “Shake, shake, shake the devil outta me”. It was a song where I saw that Jeff Klein was becoming a lively, charming and outstanding frontman in his own right.

It was also refreshing to see a live show that was so unapologetically loud, and seemed to get louder as the show progressed. By the time the band moved onto songs like “Valley of Casualties” and “Bury it Low”, the songs crescendo’s had escalated into incredibly satisfying walls of sound. They became things to be hit by – and were grand to be part of. Jeff Klein’s voice become drowned out by his accompaniment at times, but that only made his performance more kinetic and, in a way, heartfelt. “Hit the Lights” certainly felt heartfelt. It wasn’t as dark or foreboding as the studio version, but it also felt more extensive, and after the near-deafening finish to “Bury it Low”, became all the more affecting. At first it felt like a song where the crowd was meant to sing, and carry Mr. Klein along with them, but as the song approached it’s end, “The wall” approached, becoming louder and louder, and when Klein began to sing “I know what it’s like to be wrapped up in your sanity” it had turned into an overwhelming wave of noise, instruments almost becoming indistinguishable, and Jeff Klein’s voice being almost mute behind it. It was a spectacular crescendo and would have been an amazing final song. 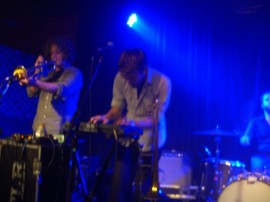 Of course, cute as it may seem, the band ended on “Farewell”. It makes for a good finishing song, it’s a song of celebration – of obstacles conquered. It’s a song that makes you feel as if you’ve witnessed something great, and is nigh-on impossible not to smile through.

When the band left, I was the first to lead the encore-riot. It sounded several times like the crowd was about to die down, but I remained vigilant. Klein returned on stage alone, picked up his guitar, and proceeded to play a very personal rendition of Heroin(e). No piano, no floating tones, just Mr. Klein and his guitar. It was a very pleasant song, and came somewhat out of left field after the the incredibly loud previous few songs they played.

I was shocked, then, that after he had finished the band returned on stage once more. When I first heard the keyboard and drums, I was frozen 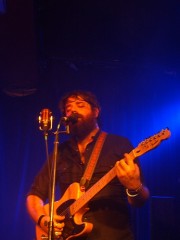 . “No way”, I thought. I think I was about half right. I’m not sure exactly what song it was they were playing as I didn’t recognise the lyrics, but I can say it felt inspired by The Twilight Singer’s “Candy Cane Crawl”. The song never felt like they were straight up playing the Twilight Singers song, or even an “inspired by” sort of song. I would say that it sounded like “Candy Cane Crawl as interpreted by My Jerusalem”. It was dark and foreboding, but at the same time there was a personal sense of hope to it. Even though, lyrically speaking, they weren’t playing “Candy Cane Crawl”, for that performance, the song may as well have been theirs. It was a perfect finish, and left me speechless. It was a finish that perfectly accomplished what every finisher should be, and was truly something to behold.

After the show Mr. Klein stepped down from the stage. I felt like thanking him – though at the same time I felt more like what I had seen was so impressive I should have been congratulating him. I couldn’t really find exactly what I wanted to say, but I hope my dumbfounded handshake was enough to imply it. I can’t recommend enough seeing this band live. They’re a group that’s perfectly in synch, that appear to love what they do and put their all into every song. I offered Klein a dumbfounded handshake, but it should have been a salute.