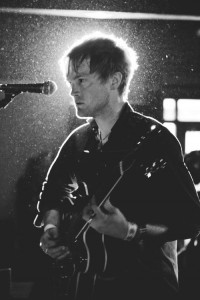 A couple days ago I had the chance to talk to Adam Stephens, the singer/guitarist of the indie folk duo Two Gallants.  After a two year hiatus, this Saddle Creek group decided to join forces once more and get back on the road.  Not only have they been touring all over Europe and the US, but are also working on some brand new material.  Adam details the tour, new songs, and much more below.

The Silver Tongue: Hey Adam, how are you doing today?

Adam Haworth Stephens: I’m doing pretty well! How about yourself?

TST: I’m doing good, can’t complain.  I just have a handful of questions about you guys getting back together and everything.  So you just got back from your tour in Europe, how was that?  Did everything go well?

AHS: Yeah, it went really well actually.  I guess we weren’t really sure what to expect since we hadn’t been on tour in so long.  We hadn’t been over there in like three years.

TST: Yeah, I saw you guys still sold out some England shows though, so that’s pretty awesome.

AHS: Yeah, I mean most of the shows are pretty well attended.  It was pretty much back where it was three years ago, if not even a few more people in some places.

TST: Nice! That’s good.  Is there a noticeable difference in the fan base over there as opposed to here in the US?

AHS: Well I think the people put a little bit more value in shows and musicians in general.  They show a little more respect in some ways.

TST: Like in regards to the live performance itself and the art of it all?

AHS: Yeah, basically audiences over there are just a bit more quiet when the song is going on and then a bit louder in between, you know what I mean?

TST: Yeah, that’s cool.  So I have a couple questions about during your guys’ split.  Now I know for the two years you guys went on a hiatus you went out and made your solo record.

TST: I was just curious, how was working with Joe Chiccarelli?  I mean, this guy has produced everything from Elton John to The White Stripes!

AHS: It was cool.  I definitely learned a lot from the whole experience, you know?

AHS: You know, we didn’t really see eye to eye on a lot of things.

AHS: Not on everything.  It wasn’t like we fought a lot or anything, but I guess we just came from two different perspectives.  I mean I learned a lot from him.

TST: What kind of conflicts did you run into with him while recording?

AHS: I don’t know, I mean I guess I just kind of wanted to preserve a little bit more of the grittiness on the record.  He’s kind of used to making glossy pop records.

TST: Yeah, that makes sense.  Was Saddle Creek pretty understanding when you guys took your break?

AHS: Yeah, our deal with Saddle Creek has always been easy to deal with them.  You know, we toured throughout sort of all of that record, of our last record, and it wasn’t like we didn’t do our part in any way.  We toured a lot for a long time, so it wasn’t like anyone could be upset with us.

TST: You guys were always on the road.

AHS: Yeah [laughs] So I don’t think they really had much reason to be upset with us.  And also the other thing was when we first decided to take a break we had no plans as to how long it would be.  We just needed the time apart and it ended up being a lot longer than we had in mind, but we didn’t have any aim.

TST: So what exactly made you guys decide to take a break?

AHS: I think we just had our difference while touring and had been together too long.  I think what happened happens to anyone, especially when they’re in a two person band.

TST: When you guys got back together, did you have any trouble getting back into the swing of things?  Or was it just like old times?

AHS: Yeah, it was pretty easy.  We just kind of fell right back into it.  We spent about the first month together just re-learning the old songs, and then we started the tour pretty much.

TST: Now I saw on your site that you have been working on some new songs, would you care to elaborate on this at all?

AHS: Umm, not really.  I mean I guess all i can say is they’re quite different from our old stuff, a lot heavier.  I kind of describe it as grunge folk metal, something like that.

TST: Kind of like “16th St. Dozens”? (a track noticeably heavier on their What the Toll Tells album)

AHS: Yeah, but that sort of more punk than what we’re working on.

TST: With all the new stuff you’ve been working on, are there any artists or albums that you can cite as inspiration for your new material?

TST: Cool cool.  Have you been showcasing any of the new tracks at your live shows?

TST: How have people been reacting to them?  Any feedback?

AHS: Yeah, people seem to like it.  I don’t know if people are just saying that to be nice or not, but it’s seems like they think they’re pretty good.  When people see us on tour they obviously want to hear our older songs because they haven’t heard anything from us in a while.  The newer songs are kind of unfamiliar to them and they just want to hear the old songs that they are more attached to.  We haven’t played a lot of them, maybe three or four new songs each show, and then the rest our older sort of more standard punk.

TST: So with all these new tracks are you guys planning to put out a new album in the near future?

AHS: Yeah, we plan on recording when we get back from our tour.

TST: Any idea of a date for when the album might come out?

AHS: It should be out by the beginning of February.

TST: Do you have any idea what the album might be titled?

AHS: No, haven’t gotten that far.

TST: Well that’s about all the questions I had, but here’s one more that I’m curious about.  After looking at interviews and being a fan of your music I’ve noticed that you’re quite a fan of 40 oz malt liquor, and I was curious what your favorite brand is if you had to pick one?

AHS: [laughs] Well I haven’t really had one in a while, but I used to always prefer Mickey’s to be honest.

TST: Nice, well thanks for chatting with me.  I am a huge fan and will be seeing you guys in Atlanta.

AHS: Awesome man, I look forward to meeting you there.

TST: Sounds good, have a good one!