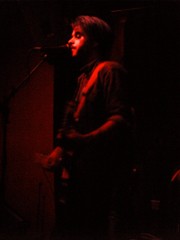 The miracle of the live Twin Shadow experience isn’t really miraculous at all. If anything, simply put, it’s a culmination of vocal ability, technological knowledge and, well, the simplistic nature of the music in the first place. There are many other factors in getting to those moments, I do realize, but as a live experience, I think these three factors are the gluey magic that makes watching a Twin Shadow show like innocently stargazing.

George Lewis, Jr. and his darling, super pro band of players and his humble attitude stopped in Atlanta this past Saturday to serenade us all at the E.A.R.L., a perfect venue for the foursome. The show sold out sometime between Friday and Saturday, despite the fact that there were three or four other awesome, review-worthy musical events competing around town for patrons. I contended all week, and much more in retrospect, that this one was the place to be.

Now, I hate to talk about crowds in a review, but this time I must. I’ve never felt such compassionate love at the E.A.R.L.; let’s be honest, Twin Shadow fans are the best. They smile, they smell nice, they make space for you up front if you have a camera, they hand you limes for your V/T when the bartender is slammed and paper towels when the bathroom is packed. It was wonderful; I left feeling that I’d made friends with everyone. Even the ‘shouting guy’ in the front was respectful, sharing lines like, “You guys are good!” and “You guys should be on TV,” which made everybody, including the band, laugh in unison, like a classroom full of behaving kindergarteners, during the quiet room moments between songs. 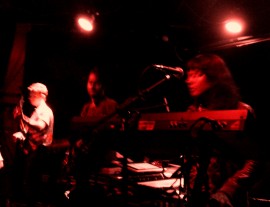 It’s no wonder that Twin Shadow fans are warm and fuzzy, I guess, mere conduits of the music. Lewis’ voice is the first tower of confrontation on record, portraying crystal clear snapshots of life and situational instances and abstract sweets made real in dream worlds. The live experience was similar, if less prominent in the mix. Don’t mistake, Lewis’ voice was heard clearly, but not super loudly, sitting somewhere low when touring keyboardist Wynne Bennett was hitting high and low synths at once, and especially when the bassist was getting in on the midi action. Still, when the songs were ringing thinly and dramatically behind quiet vocals (i.e. the verses of “Tyrant Destroyed” or “Forget”), Lewis seemed to step forward on the E.A.R.L. semi-circled, intimate stage and deliver those words directly to his fan friends. That direct honesty defined key moments in the live show. 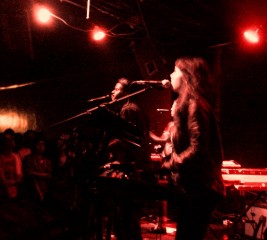 The other factoid that defined the live show were those warm, wide synths, especially when they were cheerleading sharper melodies being brought to life in dated patches; “I Can’t Wait” is a perfect example of this. And, yes, Bennett delivered them to us like Grandmothers’ dust covered trinkets – invaluable and timeless. There’s a short YouTube interview that she did with Nord, which I discovered a month or two ago, where she talks about how the band uses the Nord Wave to, quite literally, take the synths from the record with them on the road. I was curious to see how that sounded live and, I can tell you now, it made a world of wonderful difference. If they’d taken a line like the infamous synth bass of “Castles in the Snow” and tried to recreate an even boldly similar match-patch, it would’ve been a fail. But they didn’t, hence streaming success. Also, thank you 4AD Sessions for the heads up, I like Bennett’s backup vocals, particularly on “Castles in the Snow” better than the way Lewis backs himself up on the record. It’s an added dynamic that’s subtle but present. 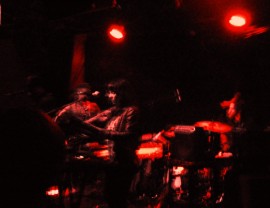 No doubt, from the clamps of the super tightly pocketed drums and Joy Division nodding likes of the live bass sound, the metallic but reverby warm guitar tones and key melodies built up a cushioned platform in between for Lewis’ storytelling and intimate onstage vibe. From the piling blogger acclaim of the Clean Cuts tour thus far, coupled with ticket sales, I sadly doubt we’ll get to experience such intimacy with this band again in the near future. But I’ll keep my fingers crossed!