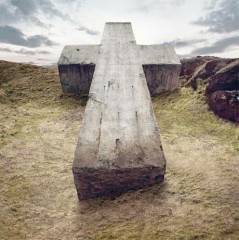 Justice has just released the cover art for their highly anticipated sophomore effort, Audio, Video, Disco. Though the French electronic duo has made it clear that they are pursuing a new sound on this album, its artwork looks all too familiar. The cover of 2007′s (Cross) featured the sketch of an illuminated cross in front of a dark background, and now Audio, Video, Disco features the real-life version of this.

Previous Entry: Mel Gibson Draws Heat for Movie Based on Judah Maccabee
Next Entry: Video: Lil’ Wayne Tells Fan to “Shut The F*ck Up” During Concert