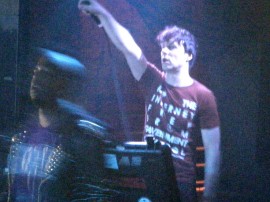 I hadn’t listened to Atari Teenage Riot in a while when I got my little digital hands on a press copy of their new record, Is This Hyperreal? As with a lot of Dim Mak artists, there are things I liked and loathed about the record.The music was intense, and experimental in modern, new ways. The lyrics are heavily political, as always, though maybe less offensively than Alec Empire’s earlier stuff. The lyrics got cliché to me after a while, but something kept peaking my interest in it, and in the newly re-formed live lineup. So I had to go down to the Masquerade last Thursday to check it out.

I got there just before the second act went on. I had no idea who he was, but went up close before the set began so as to give it an objective review. The first song sounded like pigs interwoven with screams and, as the song progressed, more barnyard animals. This one-man show was decked out in a black and gold luchador outfit, and his microphone input was dressed to the nines in effects and deconstructive processors. Song two began with a sample that boasted ‘sexual possession,’ which rolled into a beat heavy number during which I tried to figure out whether or not I was clearly catching distinctions between songs. Clarification came as the set continued, and as the crowd of may-or-may-not-be Atari Teenage Riot fans became slowly more accustomed to the sounds and practices of Otto von Schirach live.

That’s right, Otto von Schirach. From Miami, he’s worked with the likes of Skinny Puppy and Modeselektor. The guy has street cred, and I didn’t do my homework on him. I respected the second half of songs that began with film sound bites, conveying ideas such as ‘you are now inside a flying saucer’ and ‘when dinosaurs ruled the earth.’ About halfway through the set the Darth voice broke through, and Schirach spoke to the crowd in it, though I have no idea what he was talking about. He even came out of the far stage right corner to converse with a front row patron through the mic. Again, I have no idea what that brief conversation entailed.

Schirach, on a less artistic kick in the set, mixes some hip-hop undertones with break beats and video sounds ala losing a life on Super Mario Bros. I like this part a lot; it’s like Crystal Castles’ accidental song, minus the dark pacing of Alice Glass. Schirach goes on to announce the next song, “Don’t Take a Shit on Yourself Past 2pm,” and people start smiling. It goes, ‘I am a unicorn, I am a unicorn,’ and the music behind this one is consistent like the previous.

Though Schirach didn’t put on a bad set, it was certainly the case that the performance was stifled because of the crowd, or lack thereof. His experimentalism was, perhaps, too artistic for the wandering few who trickled in and out. The younger portion of the Masquerade’s nomads that night didn’t seem to understand the genre – like they had bypassed the whole noise boom of the late 90s as if it never existed. It’s best that they stayed outside smoking cigarettes during his set, I think. 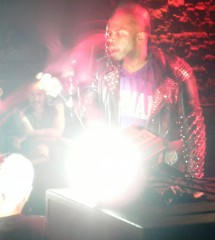 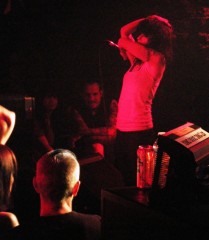 When it came to Atari Teenage Riot’s (ATR) performance, a couple of things happening that I hadn’t anticipated. First of all, I adored it. The set was well mixed with mostly highs, but some lows, stage movement was great and the sound was, though extremely loud, very well mixed. I enjoyed the live performance more than I enjoyed the new record. Secondly, the crowd was unusually small for ATR, and unusually small for a Thursday at the Masquerade. Those absent ones really missed a treat.

ATR’s Alec Empire comes out early and presses play on a crowd warmer – two tunes to get the mood going. When those are done, the three members come out, grab microphones and immediately begin with ‘How are you’s,’ which I find a little odd, but humble and polite. They play some tracks from Is This Hyperreal right off the bat, with Empire mostly behind the controls at first, directing some crowd-participation clapping every once in a while.

Nic Endo is out in front and center screaming for much of the first part of the set, her voice amazingly louder and clearer live than I have imagined. CX Kidtronik, a welcomed addition to the lineup, has a voice that is deep and articulate, a great counter to hers. Fun fact: Kidtronik played with a group from Atlanta called K.I.N. in the earlier part of the 90s. He recently described his work with ATR as ‘by far the most similar’ to K.I.N., and that fit comes across as an obvious match live. He paces the front row of monitors like a tightrope, threatening to fall a couple of times during the set.

I don’t realize how alarmingly loud the ATR show is until the harsh noises go away at about five songs in, and the low synths rise with the crowd’s applause. There’s a soft song ending moment when they play “Shadow Identity,” and it’s one of my favorite moments of the show. Endo sings that line that is so wonderful on the record, ‘Who do you want to be and why?’ It very strangely reminds me of Metric for a moment (lyrically, and ending in that way). It closes, there’s a pause and then the crew break back into a 200+ bpm frenzy. This one is stronger, vocally, with Kidtronik and Empire out in stage front and Endo at the wheel, coupling backup lines and then spitting short rants while controlling the sounds. They each take turns with the machines, which keeps the show intriguing.

The mood in me and i 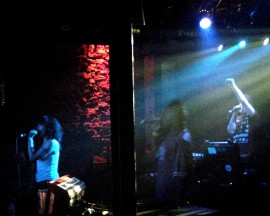 n the crowd is attuned to the three on stage by the time they crank out “Midijunkies,” which ends with snare rolls that are so classic of ATR’s sound, so piercing and so loud (I cannot emphasize that enough). Then we go from most anthemic to faster and heavier. I hate that all the guitars are programmed, but they transcribe nicely, considering. The three members layer the heaviness by all chanting together, more and more so towards the bottom of the set. They like to count songs in a lot, too, shouting intro to the tune of “1, 2, 3, 4!!!” at least four or five times.

For “Too Dead for Me” both Kidtronik and Empire are on the controls. At this point, only half of the Hell room floor is filled with people. They’re all pushing forward, but not as to offend each other. It’s not really pushing, actually, but the gravitation of a ball of beings toward that stage. Empire and Kidtronik keep sharing the board for “Into The Death,” which is beefy with the distorted guitar sounds and crazy bass hits. The sound dissipates like coming-and-going, phaser styled digital reverb that’s broken on purpose. Empire finally breaks out the cans in a moment that finds Endo on the stage floor, seemingly screaming at the stage floor, in her black jeans, wife beater and sneakers. She’s belting out ‘The time is right to fight’ over and over again, lyrical styling for a tune called “Deutschland Has Gotta Die!” It’s pieces like this that have gotten Empire’s vision in tangled messes with the German government on more than one occasion in the past. 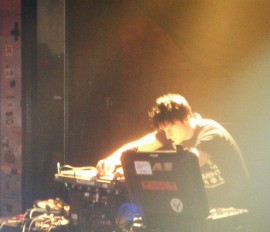 The sound goes into more of a smooth, groovy industrial beat. Kidtronik is stage front alone, and the little crowd is just as loud with their raw, ensembled shouting as he is with the microphone. We move from chants of ‘They’ll fuck you up!’ to a transition steeped in frequency play. Kidtronik asks, ‘Is ATR still necessary? With Barack Obama in office, there are more black men in prison now than in 1850.” ATR then play “Blood in my Eyes,” which breaks apart to some extended sub sounds and a wash of white noise. They leave for a handful of minutes. I go to the bathroom and find them on their way back to the stage. The encore begins with “The Western Decay,” then goes into a tune that begins like a metronome, with Endo singing, not shouting. It’s a heavy dance number, something anyone can find with their feet. There’s a lot of sing-a-long participation on this one, especially with the ‘oh ohs.’ Then Empire encourages it, as Endo finishes her part and leaves the stage. Empire turns frequency knobs and Kidtronik plays trigger pad drums with this hand. Eventually Empire puts a somber melody on over the super heavy sub sounds while Kidtronik stands with his black leather jacket draped over his head. Empire waves goodbye, shakes hands and they exit.