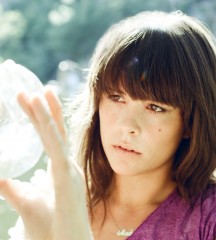 Nashville songwriter, Madi Diaz, has a new EP coming out tomorrow. It’s called Far From Things That We Know, and word of it started leaking through to me a couple of months ago when I checked out the single, “Let’s Go,” on Soundcloud. Recently signed to tinyOGRE Entertainment, the EP is a prequel to a full-length that’s slated for release sometime in early 2012.

Songs for the new EP and future record were recorded in Los Angeles and Charlottesville, VA with producer John Alagia, who is known internationally for his work with artists like John Mayer and The Dave Matthews Band. Though Diaz’ new sound is polished and pristine, it’s pretty far from both aforementioned artists, which is a welcomed thing for anyone looking for good indie-pop – something hooky and happy, but that’s rooted outside the mundane mainstream radio world.

Diaz’ new records feature Kyle Ryan, her long-time collaborator. The two are currently on tour with Keegan Dewitt, also from Nashville, who is an Independent Spirit Award-nominated film composer touring in support of recently released Thunder Clatter, an exclusive single for the Daytrotter Barnstormer tour.

Diaz has toured alongside The Civil Wars and Landon Pigg as well as part of the Ten Out of Tenn collective. Also, Diaz recently collaborated with acclaimed musician Joseph Arthur, providing backing vocals on four tracks from his new album, The Graduation Ceremony.

To help kickstart the tour, we’re giving away a pair of tickets to the Madi Diaz / Keegan Dewitt show in Atlanta on Thursday, 9/22 at the Drunken Unicorn. The winner will also receive a copy of the new EP. To enter, LIKE us on Facebook and send an email to janey[at]thesilvertongueonline[dot]com telling me why you should win.