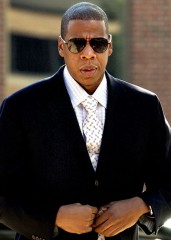 Shawn “Jay-z” Carter has come to President Barack Obama’s defense in the wake of the hostile economic climate and offered his support in his re-election campaign.

The rapper insisted that Obama has had a difficult first term because he has inherited a “tough economy,” and needs to be given more time before judging him.

“I still think he is the best man for the job, so yes (I will campaign for him),” he said. “I think he got a raw deal and he got a really tough economy. It’s going to test his mettle, which is great.”

Jay-Z supported Obama’s during his 2008 campaign and celebrated with Obama at his inauguration ceremony in January, 2009.

The rapper stated he hopes Obama’s success as the first black American president will encourage aspiring politicians of all backgrounds to aim for the top. And he also hopes to one day see the nation’s first female or Latino president, telling WENN, ‘Now we have to get a female president and a Latino president and then we are on our way.’