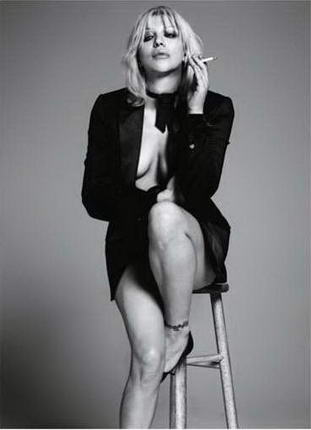 We gave up on trying to figure out Courtney Love a long time ago, but this is even strange for her. The Hole singer got very irriate and left the stage during the band’s performance  at Brazilian festival SWU on Saturday night (November 13) after someone in the crowd held up a photo of Love’s late husband, Kurt Cobain.  Check out the video below courtesy of NME.

After spotting the picture the singer goes into a full rant, telling the fan that she has to live with Cobain’s “ghost and kid” every day. She continued, “throwing that [picture] up was stupid and rude and I’m going to beat the fu*k out of you if you do it again. You weren’t married to him, I fu*king was. You didn’t get kicked out of a band by him, like Dave, he did. Go see the fucking Foo Fighters and do that shit.”

After cooling down Love came back and finished the show. But we have to ask, did Courtney overreact just a bit? Let us know what you think.