Marilyn Manson has released a 26-second video teaser for what he calls “an undisclosed song with an unreleased title”. You can check out the clip below. In addition, the singer has posted the following message on his website to accompany the track, which may or may not be titled “I Am Among No One”: “Brave

The new Foo Fighters album is due out sometime this spring but the band is letting fans hear a little bit of what’s the come. Click here to listen to the new Butch Vig produced teaser. The band will play their first arena gig at the NME Awards Big Gig at Wembley Arena on February 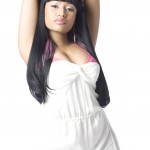