Shinedown at the Tabernacle 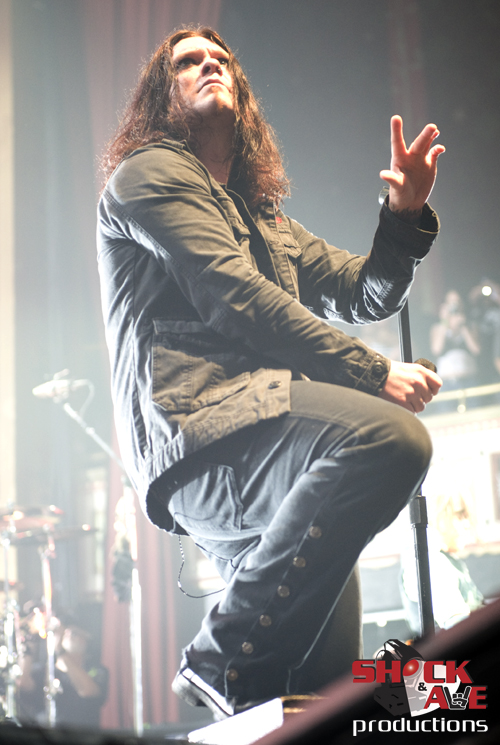 I like Shinedown, no I love Shinedown! Without a doubt, at this moment in time they’re hands down my favorite rock band. So needless to say I was stoked to be able to cover the show. In fact, if I’m being honest I had already wrote the review in my head weeks ago when I found out they were coming to Atlanta.

It went something like this, “Shinedown was wonderful. Brent Smith has the voice of an angel. It was truly a magical experience.”

Yeah a little over the top, but so freaking what, I was prepared to be a little corny, but you’re in luck because that version of the Shinedown review isn’t going to see the light of day.

I’d never seen Shinedown live, but I’ve seen video of their concerts online and the thing that always bothered me was the percentage of crowd participation. I know the crowd is going to do a sing-a-long. You’re tipsy, you’re favorite band is right there in front of you, you’re gonna sing. But if I shell out $30 for a ticket, I want to see you sing, not all the drunk but happy, people next to me. 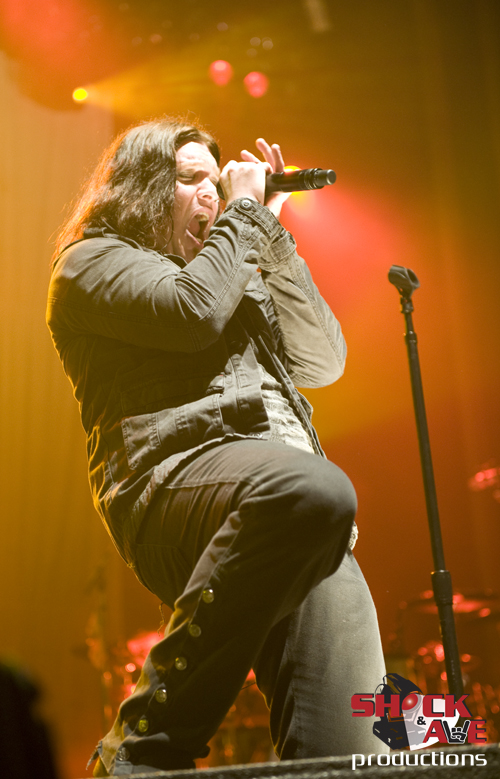 take the stage and around 9:30ish he did and everyone went crazy. Brent came out onstage decked out in all black. It was hot as hell, I wonder how he didn’t pass out. My friend Marianne Turner and two new friends we just made were cheering and screaming right along with everyone else.

Over the next few hours, give or take, the band gave a good performance. They were full of energy and Smith if nothing else knows how to connect with his fans, maybe a little to much.

After the first few songs it was clear to me that my Shinedown nightmare was coming true. Brent would start singing his ass off and then when he would get to a particular part in the song he would either change the arrangement of the song, which is cool because it still sounds good, or he’d sit back and let the eager crowd sing that part of the song.

Having the crowd participate is ok. It makes your fans feel invested in your show which is probably why Shinedown has so many fans, but it can be over done. 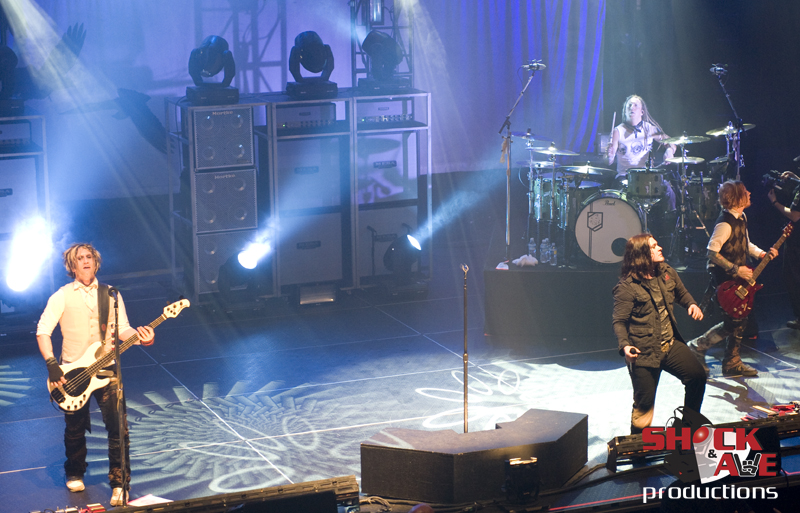 I also noticed something else, Brent likes to talk, or hear himself talk. Let me backtrack a bit. The first band to play that night was called #1 Contender. Their set was probably 30 minutes or less, but if you would have given them the extra time that Brent spent talking between songs their set would have been as long as Shinedown’s, if not longer.

Don’t get me wrong the concert was good. It was one of the better ones I’ve seen 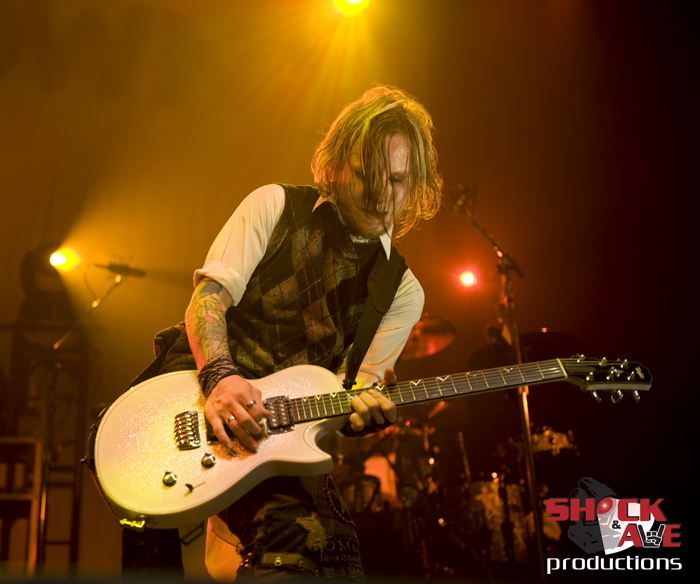 and I would definitely see them again because Brent Smith has an amazing voice and no one I can think of sounds like the man. And in the last two years or so when the radio has been inundated with crappy music, Shinedown has consistently put out good a good product . Their music has only gotten better and if you don’t believe me listen to ‘Sound of Madness’, but like I said, I came to the show to hear Brent sing. If I wanted to see random people sing his songs then I would go out and find a Shinedown tribute band.

Moving forward… they performed every song I wanted to hear with the exception of ‘Simple Man’ , which they don’t perform live anymore and haven’t for a while . I wasn’t expecting to hear it, but his performance of ’45′ was pretty much flawless and he put every drop of emotion that he could muster into that song as well as every other song. And the crowd went crazy when he started in on ‘Sound of Madness’ and ‘Sin With a Grin’. 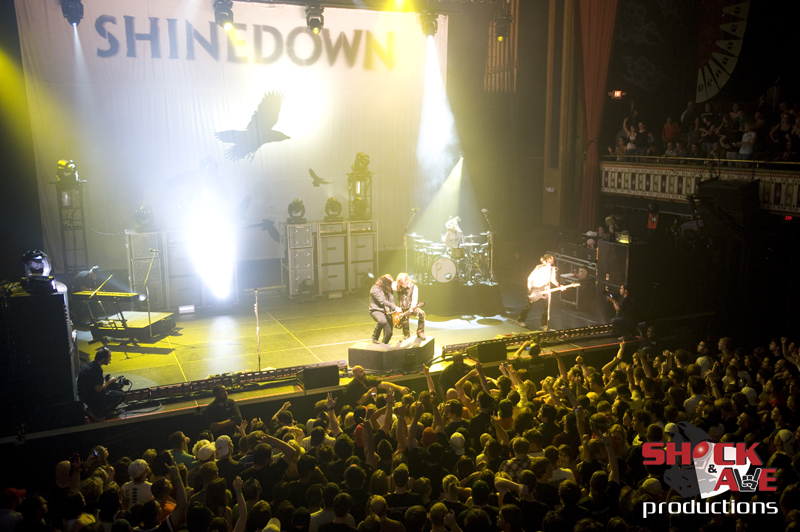 In conclusion the concert was great. They’re worth the money you spend on the tickets and everyone I spoke to loved it. Also it’s family friendly. You can take your teenagers to a Shinedown concert without any worries that the lyrics or the antics of the band will give your kid nightmares or send them into spiraling depression.

And while some small things bothered me about the show, in hindsight those things might be the very reason that people continue to go to their shows because Smith successfully makes the concert goers feel like they’re not just watching the show, but they’re actually a part of the show. And if that’s truly his goal then mission accomplished.

And honorable mention goes out to the two opening acts, #1 Contender and Halestorm. Unfortunately I didn’t pay enough attention to either band to be able to objectively review them so I won’t. But everyone I asked seemed to think both bands did a good job.

So there you go. If you haven’t purchased ‘Sound of Madness’ go out and do so because according to Brent the band won’t be back in this area until next year. Apparently they are one of the few bands that understand that it’s not good to overplay your market. And to find out what’s going on with the band go to www.Shinedown.com. You can check out music videos, blogs and they have a very interesting band Q&A section.