Posted in Music | Tagged Bjork, The Comet Song, The Moomins
By TST Staff on November 17, 2009
Tweet 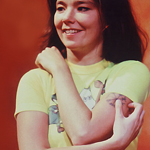 Icelandic “Sugar Cube” and song-writing princess, Bjork will be contributing to the soundtrack for a movie based on a cartoon about a family of white troll-like hippos inhabiting Finland. The movie is entitled Moomins and the Comet Chase and will be making its debut in summer of 2010. The Moomins are a personal favorite of Bjork and even affect her choice of clothing based on what you see on her official website. When the Moomins move into U.S. theatres expect to hear Bjork