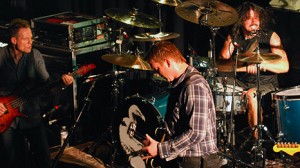 Them Crooked Vultures,the new band featuring Dave Grohl (Foo Fighters, Nirvana), Josh Homme (Kyuss, Queens of the Stone Age ) and the legendary John Paul Jones (Led Zeppelin) will release its self titled album on November 17, but the first single, “New Fang” is currently streaming on the bands MySpace page. The track is also being offered as an instant download for all fans who pre-order album on iTunes.

The collaboration between Homme, Jones and Grohl was first publicly mentioned by Grohl in a 2005 interview with Mojo, in which he declared “The next project that I’m trying to initiate involves me on drums, Josh Homme on guitar, and John Paul Jones playing bass. That’s the next album. That wouldn’t suck.” Homme’s wife Brody Dalle stated in July,  “I’m not at liberty to talk about it, but I think [the project] is pretty fucking amazing. Just beats and sounds like you’ve never heard before.”

English music magazine NME reported back in July that the trio had begun recording in Los Angeles.
Them Crooked Vultures performed its first show at the Metro in Chicago on August 9. The band played all original material during its 80-minute set, debuting such songs as opener “Elephants”, “Scumbag Blues”, “Caligulove” and closing song “Nobody Loves Me and Neither Do I”.

TCV made its European debut on August 19 with a performance at Melkweg in the Netherlands, the same day on which a short video clip of studio footage was uploaded by the band, featuring the song “Nobody Loves Me and Neither Do I”, essentially confirming its inclusion on the band’s debut album.

Them Crooked Vultures kicks off its tour Nov. 17 in Los Angeles. For more information including tour dates click here.

Previous Entry: Cavo, Needeep and Branded with Fear at Masquerade 11/11
Next Entry: Joe Perry Twitters, “Aerosmith Not Splitting Up”