Lamb of God, Devil Driver, Shadows Fall and High on Fire in Melbourne 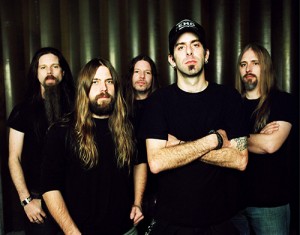 Melbourne has always been a hot bed of metal, and what better way to kick off this summer’s round than with High on Fire, Shadows Fall, Devil Driver and Lamb of God all raising hell and kicking ass on the same night!?

This gig was set to deliver something unique and ball busting; with four of the hardest working metal bands in the industry today it exceeded expectations. High On Fire was up first and I was a touch upset to see the crowd’s response to the band. There was hardly any movement or crowd participation, except a few diehard fans in the pit and up in front. High on Fire put on a great show. Their sound was tight and the vocals were spot on.

I was really happy with the change over/set up times between each band. Often it can take up to 45 minutes from the end of one band to the start of the next, which can cause the crowd to lose energy and momentum, but set changes this time around were no longer than 25 minutes.

In my opinion Shadows Fall is one of those bands who have been around for a while but never really done anything, I’ve always listened to their albums and I’m impressed with their musicianship, but something about Shadows Fall on record just fails to impress. It’s the complete opposite with their live show, I found myself questioning my Shadows Fall fandom.

The energy was electric and the music was hard, fast and heavy. Singer Brian Fair was really giving it his all and trying still to get the unresponsive crowd to loosen up. Their sound was slightly let down by a bad mix. The guitars were distorted and it was hard to hear a clear cut defined guitar sound. A tribute to the late great Darryl Dimebag Abbot was well received with the band jamming on a few bars of Pantera’s “A New Level“. As far as stage presence goes though, Brian fair really carries the band, there wasn’t much movement from guitarists Jonathan Donais and Matt Bachand,  this could be the reason the crowd was as still as the background in a Hannah Barbara cartoon.

Devil Driver kicked every one’s ass at Soundwave earlier this year, with an abysmal performance from Lamb of God, I was really interested to see if maybe the rolls had reversed this time around. But both bands delivered. Truly delivered. Finally the crowd was as pumped. The pit was insane, with a “Good old fashioned Californian circle pit” as front man Dez put it, opening up during “Clouds over California“.  Devil Driver has always been ones to bring an amazing live show, and this was no exception. Down in the circle pit fans were in a frenzy, beating, the crap outta each other in a way that makes Quentin Tarantino films look like Sesame Street.Guitarists Mike Spreitzer and Jeff Kendrick were spot on, although again they suffered from a hazy sound but with Devil Driver’s pure guts and energy that really didn’t matter.

After failing to excite me at all at Soundwave earlier this year, Lamb of God redeemed themselves. The stage turned blue and over the speakers came the somewhat haunting opening track “The Passing“, from their latest studio album ‘Wrath‘. This would set the mood for the remainder of the night. After the hanging cadence, Lamb of God burst onto the stage with the groove machine that is “In Your Words“. Randy Blyhte maybe one of the greatest metal front men to grace the stage today, you find yourself drawn to his erratic, strange and sometimes dangerous movements. You would think with all this running around and head banging that Randy’s vocals would suffer, which to an extent they do, but can you honestly name one front man who doesn’t sound a little different live, no. Unless you want Randy to be encapsulated in a glass booth fitted with a condenser mic onstage, you’ll just have to learn to live with the fact that he’d rather deliver an amazing stage presence than have all his vocals clean and crispy, which Randy has never been anyway, all his vocals, even on the recordings are raw, the way a real metal band should be.

Despite only playing two tracks from Sacrament; “Walk with me in Hell” and “Redneck“, the set list worked really well and seemed really balanced. “Do you mother fuckers like fast shit in Melbourne” Screamed Randy to the sweaty and injured crowd, “Well this is a punk rock song” and with that the band nailed into “Contractor“. The highlight of the night for me though, was the laid back melodic guitar jam between Mark Morton and Willy Addler. It really soothed the senses and closing your eyes you could be stolen away to a place where Dimebag had never left us. Mark and Willy truly captured Dimebag’s feel for melody and precision. I don’t know if that is what the boys were aiming for but that’s what I took away from it. “It’s your world you gotta take care of it” was the opening statement to the bands tightest performance of the night “Reclamation“. This epic seven minute track is a masterpiece on record and I actually doubted the bands ability to pull it off live. But once again Lamb of God nailed it. I’d like to think the message of that song isn’t lost on the fans, from what I know LOG fans are pretty intelligent. “Humanities a failed experiment, walking the path to extinction” to me is one of the most profound and intelligent lyrics in modern metal.