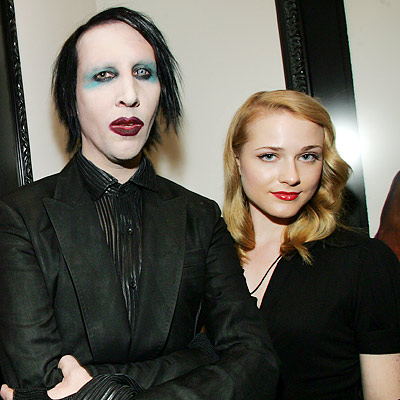 Marilyn Manson announced that he hasÂ  broke it off with long-time record label, Interscope.

In an interview with Metal Hammer, Manson expanded on the parting of ways. â€œWe’ve just been released from our record contract with Interscope so I think a lot of the creative control on which my hands were tied [is now free].

Manson has big plans for upcoming projects, with his creative juices freed, he stated, â€œIt will be more badass; itâ€™s going to be more romantic.Â  Self abusive.Â  We started writing new songs on the road â€“ a bit like [David Bowie's album] ‘Aladdin Sane.’ I think people can expect a new record a lot sooner than we [expected].”

In the interview Manson also talks about reuniting with Evan Rachel Wood. â€œI think I’m not afraid to be me. Sometimes you feel awkward being what you’re best at, you feel like you have to be something new. But I think that a lot of people will agree that me being me at my best [is what] I need to be.Â  I think that that really paid off because I’m back with Evan.”

Marilyn Manson has been taking some heat recently for his latest video for the track, ‘Running To The Edge of The World‘. In the video a woman, whom some said resembled Wood, was beaten bloody.

Calls to Marilyn Mansonâ€™s manager, Tony Ciulla, for a statement on which label Manson is considering have not been returned as of publication of this article.