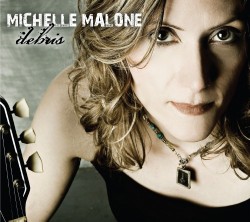 It’s going to be one helluva roof-raising night at Eddie’s Attic for New Years Eve. None other than Moanin’ Michelle Malone will be in the house performing basically all night! The mayhem will get started off with Malone hitting the stage with her “Drag The River” bandmates for what is sure to be an epic musical reunion; something that has only happened two other times since 1991.

DTR was a hugely popular roadhouse rock band that packed venues across the country. Composed of Malone and veteran musicians Jonny D, Billy Pitts and Phil Skipper (“Phil Zone”), the band enjoyed major label success, tours and were often joined on stage by many other famous musicians, just for the chance to jam with them.

I asked Michelle why the reunion now, and why doesn’t DTR get together more often. She said, “We would love to, but the guys always have so much going on, as do I, that it’s usually one of those moons/star/planets aligning perfectly for us all to be able to do it. I can’t wait to be on stage with them again!” When asked if they’d practiced at all since it’s been quite a while since they’ve played together, Malone replied, “Oh man, yes we did once, but it’s kinda like riding a bike for us. Those songs are so ingrained in our memories, fingers, hearts and souls; we could play em’ in our sleep!” There is no doubt that this will be a rousing reunion to be remembered!

As if that isn’t enough, “Michelle Malone Banned” will then play a full set after DTR. What an absolutely awesome opportunity to see a great night of music. There are a VERY few tickets left to this all ages show, and a portion of ticket sales/merch will be donated to various non-profit organizations. Michelle asked that if you’re coming to please bring your video camera for an upcoming project they are working on, and want their fans perspective (and footage)!
The 10:00 p.m. show featuring “Michelle Malone Banned” and “Blue Mother Tupelo” is already completely sold out! “Blue Mother Tupelo” is made up of the husband/wife duo of Ricky and Micol Davis of Knoxville, Tennessee. They have been featured on the Southern Fried soundtrack, a music video featured on the DVD of the movie “Daltry Calhoun” starring Johnny Knoxville and Juliette Lewis and just released their new CD, “Heaven & Earth.” “Michelle Malone Banned” released the critically acclaimed “Debris” CD this year and is featured consistently on radio across the country. The CD is currently number four on “Twangville”.

Get your tickets NOW at www.eddiesattic.com.