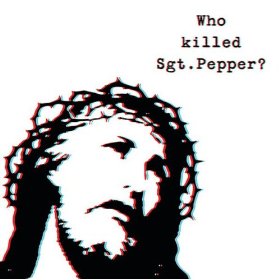 The Brian Jonestown Massacre is set to release their tenth studio album, “Who Killed SGT Pepper?”, on February 23rd.  The musical commune that makes up The Brian Jonestown Massacre has been composed of many respected musicians over the years;  including artists that have moved on to other band formations.  Members of Black Rebel Motorcycle Club, The Warlocks, The Silver Rockets, The Black Angels, The Raveonettes, and The Dilettantes; were all once part of the BJM musical family.

The psychedelic album features bassist Will Carruthers, of Spaceman 3; vocals by Unnur Andrea Einarsdottir, and a number of other artists that have never before contributed to a BJM record. The album’s thirteen tracks were recorded throughout 2009 in Iceland and Berlin.  The album is being released on A Recordings LTD, band leader, Anton Newcombe’s own record label; in collaboration with Red Eye distribution.

“Who Killed SGT Pepper?” marks the return of guitarist/vocalist Matt Hollywood, an original member and co-founder of TBJM.  Matt was involved in the creation of material from the band’s early albums such as Strung Out in Heaven, Their Satanic Majesties Second Request, Take It From The Man, Spacegirl & Other Oddities, and Give It Back.  Mr. Hollywood was also the writer of the infamous dig at the Dandy Warhols, “Not If You Were The Last Dandy on Earth.”

The band has an extensive itinerary of shows booked in Europe and will soon announce their highly anticipated U.S. tour for Spring.  See the band’s myspace page for details (link at end of article).

Previous Entry: The Modern Day Cowboys: Tesla Gears up for their 25th Year Anniversary!
Next Entry: Dance in the Dark with Astari Nite’s Self-Titled EP