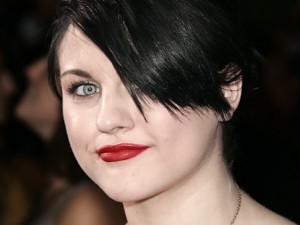 Francis Bean Cobain, the daughter of the late Nirvana frontman, Kurt Cobain, and Hole frontwoman Courtney Love has decided to follow in her father’s (and mother’s) footsteps.

According to Spin.com, the 17-year-old will make her recording debut with Evelyn Evelyn, a new project from Dresden Dolls frontwoman Amanda Palmer and bandmate Jason Webley.

Francis will be joined by Tegan and Sara, Andrew W.K., “Weird Al” Yankovic, writer Neil Gaiman, and My Chemical Romance frontman Gerard Way to provide vocals on the song “My Space.” My Space is one of the 12 tracks on Evelyn’s self titled debut album. The album is set to be release March 30th on Eleven Records.