Live Show Review: Them Crooked Vultures at The Tabernacle 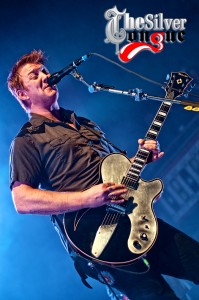 Them Crooked Vultures set their perch atop the Tabernacle last Thursday night.

In a music world that seems to be spitting out so called “supergroups” left and right, Them Crooked Vultures are circling and setting their gaze upon the dieing carcass of mainstream rock groups creating bland and uninspired rock and roll.

Them Crooked Vultures have a sound that blends together the quirky inspired fuzzy  jams of Josh Homme (Queens of The Stoneage), the mastership bass and keyboard playing of John Paul Jones and the pounding beats of Dave Grohl. With this foundation ,Them Crooked Vultures came out with a sound of their own that is far from the regurgitated let’s write one good song that  and put out  a bunch of weak filler shit  to fluff up the rest of the record.


The Tabernacle was sold out and packed with curious and envious fans like myself. For me the highlight was finally getting a chance to see a living legend, John Paul Jones! Their was a vicious rumor of a Led Zeppelin reunion last year that never happen, thus putting an end 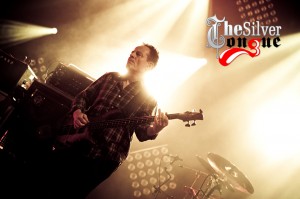 to my dream of seeing part of rock and roll history. I have seen Josh Homme live once before with The Screaming Trees as a touring guitarist on their Dust tour and it was my first time seeing Dave Grohl.

I make my way to the balcony stage left and find a place on the wall in front of the staircase parallel to the edge of the stage with an unobstructed view. Lights out and the crowd screams as Dave Grohl hits the beats and John Paul Jones starts tapping out a  beat to the strutting song ‘No One Loves Me and Neither Do I’. Josh Homme squeezes out a high stepping rhythmic  riff and struts along sounding as if he is just casually standing on a street corner telling a story. Grohl and Jones rhythm pulse on this song stands out and keeps your internal pecking motion feed! 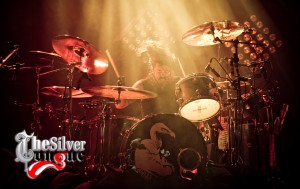 I made my way downstairs during the next song “Dead End Friends” and end up at the back of the floor hanging out near the doorway.

Next they went into “Scumbag Blues“. Josh and touring Guitarists Alain Johannes really shine as they trade licks  during this jam and Josh pulls off a great trippy Cream inspired vocals then picks it up and blast into “Elephants“. Elephants is the song you envisioned when you first heard about this line up. It starts with big fat Zeppelin style riff and a heavy low end groove that spins ahead then accelerates into a whirlwind with the rhythmic power of Grohl, and Jones galloping and crashing into a airy interlude before slamming back into heavy Zeppelin flavored riff to end. 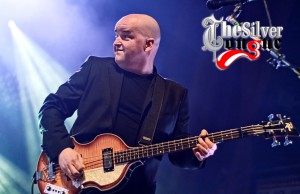 They run through “Highway One” and the first single “New Fang” ,Gunman and Alain solo before they get to “Bandoliers”. Introduced as a Love song you can hear the Mark Lanegan influence on Josh’s vocal style on this song. “Mind Eraser, No Chaser” was next and probably the most Foo Fighters inspired song of the night.

Through out the night John Paul Jones played a variety of four-, six- and eight-string basses but he pull out his Keytar for “Interlude w/ Lodes”. During this song Josh put down his guitar and tries to put on his crooning vocals and hypnotic dance moves in what looked like an attempt to put Jones in a trance, but while watching Josh without his guitar and contorting onstage,  I kept getting flashes of Jim Breuer doing his stand up routine about the heavy metal hookie pookie (Why? I don’t know but it was pretty funny!) 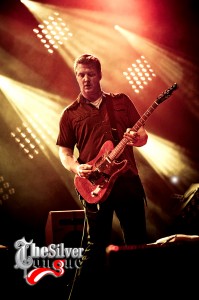 The free loving “Caligulove” was next with its Doors inspired psyche gushing from it. Next was “Reptiles” then it spun into “Spinning in Daffodils”. Jones spins his magic on the keyboards as the song turned into an inspired blues Jam by Homme.

The show ended with the song “Warsaw or The First Breath You Take after You Give Up”, the song comes apart and burns up in re-entry as the pace quickens to an incendiary rate with Grohl going  primal on the drums, an act that sends Jones and Homme into a fret board fury before the crashing end!

There was no encore, but after that performance there was none needed.
To sum it up, no cookie cutter pseudo-supergroup sound. Just three great musicians playing fuzzy, bluesy inspired jams.