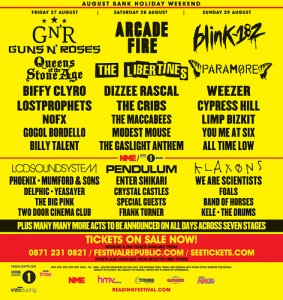 Guns N’ Roses, Arcade Fire, and Blink 182 will headline the 2010 Reading And Leeds Festivals.  The American trio will each close one night of the three-day event, which takes place on August 27-29 and rotates between the two sites in the UK.

Although legendary rockers Guns N’ Roses are still fronted by AXL ROSE the rest of the original line-up – including guitarist Slash – will not be performing. They have been replaced by a completely new band.  The gig will mark GNR’s first ever Reading appearance, although they headlined the Leeds leg in 2002.
Reading and Leeds will also see the only English shows played by the reformed Blink line-up of Tom Delonge, Mark Hoppus and Travis Barker.

NME.com reveals that The Libertines are reforming especially for the event.  A spokesman for the Festival said: “These will be The Libertines’ ONLY gigs worldwide and are unmissable for any music fan.”

Mainstage acts joining the headliners will include Dizzee Rascal, Paramore, The Cribs, Biffy Clyro,  and Weezer.  Queens Of The Stone Age, who are making their live comeback after frontman Josh Homme’s activities with Them Crooked Vultures, will also perform on the mainstage.

Tickets are on sale as of March 29.