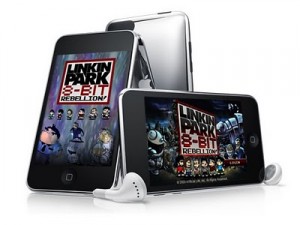 Teaming up with Apple, Linkin Park has announced the release of their new song “Blackbird,” which can be acquired through their mobile game app “Linkin Park 8-Bit Rebellion!”  The band has taken an interesting turn in releasing their new hit single, exemplifying just how multifaceted the music industry can be.  Not only is the song featured on a video game played on one’s personal cell phone, but the song is being released through a medium that has not previously been utilized for releases.   The band wanted to create an experience that music lovers and gamers alike could enjoy.  The band was involved in every step of the game’s creation including the characters, storyline, and of course, the music.  This new mobile game application breaks the idea of fitting music to video games, and brings the idea of creating games around the music.

The band created the application with Artificial Life, Inc. and is an action adventure game.  The players aim is to defeat PixxelKorp, an “evil HD empire” that has stolen Linkin Park’s music. Each level is based on a different band member, and the levels are called “districts.”  Every district that the player beats raises them to the next level.  Although the game is an iphone application, it’s built to be a full-on video game packed with adventure.  Also featured in “Linkin Park 8-bit Rebellion” is the advantage of an online community.  Through the game, users are able to communicate through posting scores, IM chats, message boards, ranking players, and even sending gifts.  There is also an offline mode in which you can play the game, buy new items, and still do other tasks at the same time. When you return to online mode, it simply syncs up and updates your scores.  Simply put, this is the first application to combine gaming, social networking, and news updates simultaneously.

Not only is this the first time that a new single has been released through a mobile game app, but the game will also feature 8-bit versions of Linkin Park’s hit songs “In the End,” New Divide,” and “Crawling.”

To watch a preview of the game, click on this link: http://www.youtube.com/watch?v=DKSQryLmqlA

“Linkin Park 8-Bit Rebellion” will soon be available through the ITunes store for the iPhone, iPad, and iPod.