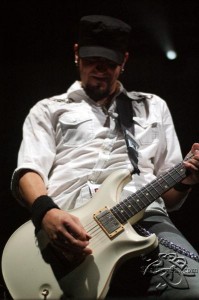 Recently TST reviewed the Breaking Benjamin show in Augusta, Georgia. The rock band from Pennsylvania is currently on tour with Three Days Grace and Flyleaf in support of their 2009 release Dear Agony, but TST’s Chris Green had a chance to speak to Breaking Benjamin’s Aaron Fink in between their very demanding tour schedule and ask him a few questions about how Breaking Benjamin came to be, their new album and their upcoming tour with Nickelback.

We went to middle school and high school together, so we knew each other for years. I was with BB in 98′ which was the original version and then Ben left and then reformed the band in 2001 and I joined New Years 2002. We were always in sister bands. We lived one block apart growing up so there is a lot of history.

Is there a story behind the band name Breaking Benjamin?