Posted in Music | Tagged devo, minion, something for everybody
By TST Staff on June 10, 2010
Tweet 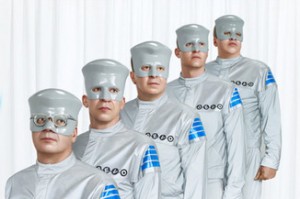 Devo is releasing a new album after a twenty year lull.  The American alternative music act, best known for it’s 1980 hit, “Whip It” now is trying a new method to win fan approval – asking what it is they want to hear.  Something For Everybody, featuring the single “Fresh,” will be released by Warner Bros. Records June 14th in the UK (June 15th in the US).

Devo singer and co-founder, Mark Mothersbaugh, told Reuters Television that the latest album was shaped through an online campaign which asked fans for their opinions.  He said, “”We thought people understood us enough to make observations which could be really important.”  The result:  a disc which bears a promotional sticker stating, “88 percent focus group approved.”

Fans selected 12 of 16 songs to comprise the album, as well as the new color for the band’s trademark flower pot hats (choosing blue rather than red).  Fans also submitted decisive advice regarding the cover art.  “The focus group liked the picture of the woman eating a piece of candy in the shape of a Devo hat,” Mothersbaugh said.

The campaign was devised by the U.S. advertising agency Mother.  “People nowadays really don’t like surprises,” explained Bill Moulton, creative director for Mother.  “They look at surprise as something negative, as something scary.”

Mark Mulligan, Forrester Research media analyst, said the band’s approach made sense in an era where fewer fans were buying music.  “The relationship between fans and artists is much closer than it was before and will continue to become closer, and that’s simply because the role of record labels cannot be relied upon as a guarantee of success anymore,” Mulligan said.

Mothersbaugh said the band’s focus group strategy is also meant as a statement in itself.  “We were doing it both for real and also kind of a little bit as a joke, poking fun at pop culture.”