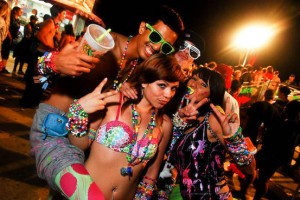 The 14th annual Electric Daisy Carnival in Los Angeles, CA, last weekend featured rides and five stages with performance by Moby and Will.I.Am.  It also featured hospital stays for more than 100 of the 185,000 people who attended the event Friday and Saturday, June 25 and 26.

More than 200 people were injured, over half of whom were transported to local hospitals during the two-day electronic music festival and rave held at the Los Angeles Memorial Coliseum and Exposition Park.  According to Associated Press, L.A. authorities said Sunday that several injuries resulted as people rushed barriers trying to get in without the $75 admission ticket. This chintzy plan backfired for many however as fans were then injured and as a result laden with a costly hospital admission fee.

Los Angeles fire spokesman Brian Humphrey diffused the mob element, saying there were 226 injuries reported, and most of the 114 people hospitalized were actually taken for drug or alcohol problems. The extent of the injuries was not clear.