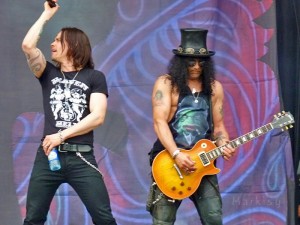 Watch Myles Kennedy’s great spin on the Guns-n-Roses classics during Slash’s performance at the Glastonbury Festival June 27th performance.
On the heels of his solo album debut as #1 Rock Album and performing at some of the largest European outdoor Festivals, Slash launches his U.S. Summer tour.
The U.S. dates will feature vocalist Myles Kennedy who was also part of the European tour and received strong critical praise at shows like the Download Audiences in Europe were treated to a career-spanning Slash set list of songs from the new album which Kennedy provides vocals for two songs, along with Slash classics from Guns N Roses like “Sweet Child O’ Mine”, “Paradise City” and numerous Velvet Revolver, and Slash’s Snakepit favorites.