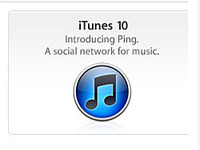 At a press conference yesterday, Apple unveiled a music based social network that will connect friends and fans using their existing iTunes music libraries. Ping, the buzzword-esque name of Apple’s new service, will allow you to track your friends music listening habits while also following your favorite artists to find out what they are blasting out of their speakers. Ping is included in the most recent download of Apple’s iTunes, the 10th full version of the free software.

Among the friend connections and playlist voyeurism, Ping users will also receive concert updates and will be able to view friends show-going plans. Now you might have to take extra special care to hide your love for late ’90s boy bands.

Apple is currently the world’s largest music retailer and with 160 million subscribers to iTunes the company has an enormous base that will be able to access the new service with a few simple clicks of the keyboard.

To gain access to Ping make sure you have the latest version of iTunes by heading over to Apple.com.