Posted in Uncategorized
By TST Staff on September 1, 2010

Seemingly ageless rock n’ roll artists Billy idol and Joan Jett descend on Atlanta’s Chaistain Park Amphitheater for a straight up night of music performed the way it is supposed to be.

Joan Jett and the Blackhearts opened the night with a set drawing from throughout the singer/songwriters career. Opening the set with the “Bad Reputation”, Joan Jett and the Blackhearts led fans through a career history in an hour long set of artist selections, fan favorites, and commercial hits including “Cherie Bomb”, “Do you wanna touch”, “Fake Friends”, and “Naked”. The more commercially popular songs drew rousing sing alongs from the audience while the early and deeper tracks appealed to long term fans. Judging from crowd response, the music and songwriting both past and present are still relative and popular to the bands generation as well as younger audiences being exposed to the group live. To close the set, the group delivered their 80′s anthem “I love Rock N Roll”, “I hate myself for loving you”, and garnered standing ovation from the ever soulful rock/punk classic “Crimson and Clover”. Overall, Joan Jett and the Blackhearts perfectly complimented the headliners set in both genre and fan demographic leaving the audience in high anticipation for Bily Idol. 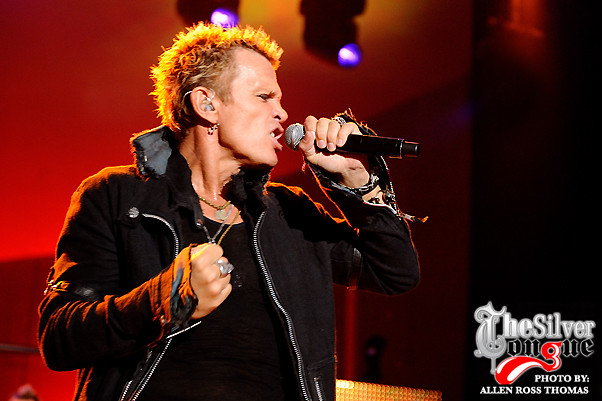 Few artists have demonstrated such sustained and widespread appeal across musical trends as Billy Idol. Touring in 2010 with the exceptional lineup of Steve Stevens (lead guitar), Jeremy Colson (drums), Billy Morrison (ryhthm guitar), Stephan McGrath (bass), and Derek Sherinian (keyboards) Billy Idol confirms his current relevance and cross generation appeal with a contemporary production avoiding any resemblance of farewell or nostalgia. Opening the set with the classic Generation X song “Ready, Steady, Go” with the band playing on a darkened stage, the seemingly ageless Idol enters the production on the upper catwalk with his boyish smirk prompting thunderous crowd response. With full scale production underway, the band immediately moved into a second Generation X classic “Dancing With Myself” bringing the audience to its feet and setting the highly energetic and engaging tone of the evening. 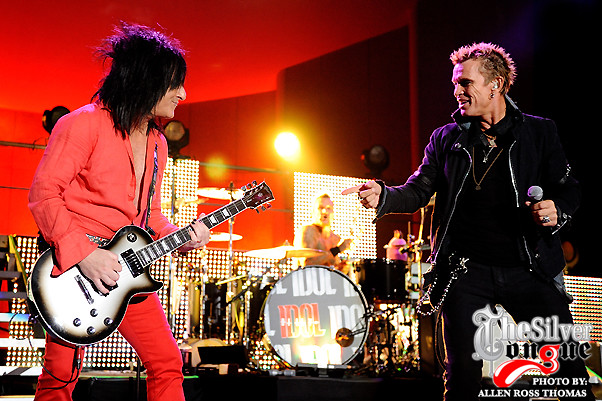 The set drew largely from the artists classic material while adding a contemporary feel to the tracks which showcased the chemistry and onstage dynamics of Billy Idol and Steve Stevens while gelling perfectly with the band and audience. New tracks such as “Love is strange” mixed well with the classic hits. Idol maintains every bit of his classic look as well as voice and stage persona keeping true to his punk roots through his trademark moves of pumping fists, evil grins, nd guttural screams during “King Rocker”, “LA Woman”, and “Scream”. The softer and more refined Idol being demonstrated through the slower paced numbers including “Flesh for Fantasy”, “Eyes without a trace”, and “Kings and Queens of the Underground” all complimented by Steve Stevens talented and diverse playing style opting for acoustical interpretations of the slower paced numbers including a break to showcase the player in solo form. In a very welcome detraction from the traditional guitar solo, Stevens delivered an 8 minute solo in largely flamenco inspired acoustic showcasing a masterful diversity with his instrument. 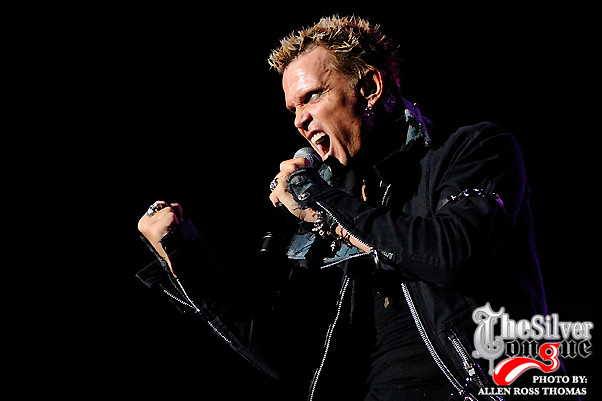 To close the main set, the band then went into “Blue Highway” again bringing the lively crowd to its feet and moving into an extended version of the artists fist thrusting classic “Rebel Yell” drawing a standing ovation from the crowd which continued into the encore. The two song encore began with Idol thanking fans and the band for such a blessed life as he was joined by Steven’s center stage donning an acoustic. Following more crowd banter, Idol directed the guitarist to show the crowd what a hit song sounded like as the opening lines of “White Wedding” were delivered in acoustic form in similar fashion the the VH1 unplugged performance. Idol held the final note of opening lyric for a solid and unwavering 15 seconds as they launched into the full band version complimented by the sea of audience dancing and writhing in uncoordinated unison. Without hesitation Idol and band then led the capacity crowd through the Tommy James & The Shondelis cover and Billy Idol anthem “Mony Mony” to end an amazing night of rock n roll. 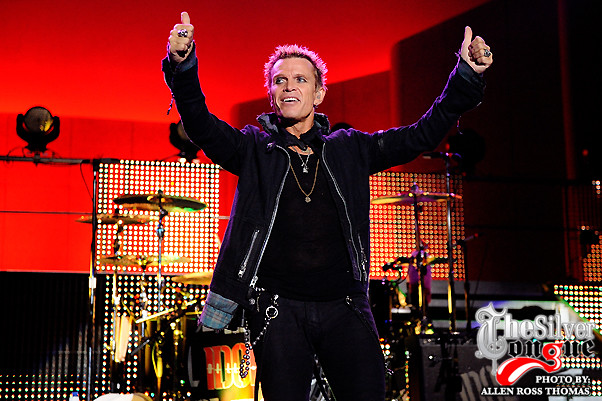 In a world of one hit wonders and ever shifting musical trends, Billy Idol has managed to sustain popularity through generations of fans old and new. Maintaing relevance and credibility through an unwavering commitment to himself, his music, and his fans while ever demonstrated through live performance.