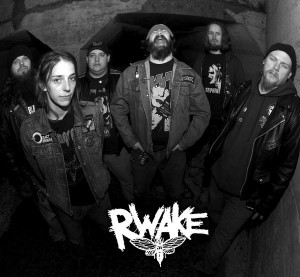 At the third annual Devilneck Metal Festival in Athens, GA, TST was treated to some of the best doom, sludge, stoner, and other high volume acts in modern underground metal.

Brad Olsen of TST sat down  with lead singer CT and with drummer Jeff Morgan to discuss the bands history, influences and the recording of their forthcoming album.

Brad Olsen: Thanks for doing this interview C.T., you put on a great performance tonight. So how long have you guys been playing together?

Brad Olsen: Who writes most of the bands music? You, or is it a collaborative effort?

C.T.: Well, actually Jeff writes most of our stuff. He’s really metaphysical and inspired. He plays a bunch of instruments and has side projects to try stuff that he can’t in Rwake.

Brad Olsen: What other bands do you guys play in?

C.T.: I sing in Iron Tongue, and Reid plays bass in Dead Bird. We’ve all got little side projects going on though. We have to since Arkansas (where Rwake is from) has a very small metal scene. By making more bands we’ve created a pathway for touring musicians to come through and play on a different bill each time.

Brad Olsen: What about the lyrics?

Brad Olsen: What kind of themes do you like to explore?

C.T.: 75% of my lyrics are fueled by these extremely vivid dreams that I have. A lot of times they are really personal, but I always use metaphors to get the point across.

Brad Olsen: So it’s been three years since your last album. When can we expect a new album?

C.T.: Yeah, we’re actually expecting to have the new record out by next Summer after a European tour and a re-release of Hell Is A Door To The Sun, which is being remixed by Relapse. We’ll be touring the US in support of it, hopefully, by next Fall.

Brad Olsen: Do you know the tracklist?

C.T.: Yeah, it’s only four songs. “An Invisible Thread,” “It Was Beautiful, But Now It’s Sour,” “Sad Devotion,” and “The Culling.” But we’re not sure of the order yet.

Brad Olsen: Wow, only four songs. So will this be a concept album?

C.T.: No each song is its own entity. We’ve discussed maybe doing a concept album in the future though.

Brad Olsen: How is your new stuff different or better than the old?

C.T.: Well we’ve grown a lot musically. This album is a lot more epic. It’s only four songs, but it’s more than an hour long. I feel like we’ve always been moving towards longer and longer songs. It’s just a natural progression for us.

Brad Olsen: Will there be more voice samples like you’ve had on previous records?

C.T.: Yeah, not as many, but we’ve got a few. We’ve got one of Arthur C. Clarke saying something like “For each human soul that dies there are a billion other universes born.” Just heavy shit like that.

Brad Olsen: What books or movies inspire you?

C.T.: I really love Emily Dickinson and the Let The Right One In series by John Lindqvist. And I’m a huge movie buff. I just saw The American with George Clooney which was really good. I try to see movies whenever I can.

Brad Olsen: Hey Jeff. It’s nice to meet you. I’ve heard that you are the creative director of Rwake. What inspires you musically?

Jeff Morgan: Nice to meet you man. Well a lot of things inspire me. I was raised by my Mom who was a psychic medium and I feel like a lot of her spirituality has passed on to me. I was always into ghosts and stuff as a kid, and I just decided to channel that spiritual connection into music. All our songs are about metaphysics and stuff.

Jeff: It just comes to me all the time. I feel like it’s a curse sometimes because I’ll just be driving or something and a riff or melody will pop into my head and I’ll have to pull over and record it on my phone before I can get back to what I was doing. When I was fourteen I offered my soul to Cliff Burton, I think that may be a source of it too. I feel like all of our music is predestined in a way. Like its all been done before and has just been waiting to be brought back. I’m a strong believer in cycles of the Earth. It’s extremely important, especially now since we’re nearing the end of our cycle.

Jeff: Not so much. It’s mostly just that I feel like now is an important time, and that it is nearing an end. But I’m prepared for it.

Brad Olsen: So what does that mean for music now?

Jeff: Music now is more important than ever. For a while, the art was lost in the desire to become successful. It was all about the look and making a lot of money. But now with bands like Mastodon and Neurosis, we’re starting to hear the emotion come back into music. We are starting to feel music again.

Brad Olsen: I have a theory that “heavy” music isn’t so much about loud guitars and screaming vocals as it is about soul and emotion. By that theory, Aretha Franklin could be just as heavy as Black Sabbath or Mastodon. Do you agree with this?

Jeff: Oh yeah, totally man. To me, Hank Williams Sr. is probably the heaviest music of all time. Sometimes when I hear him play it just brings me to tears. It’s just so beautiful.