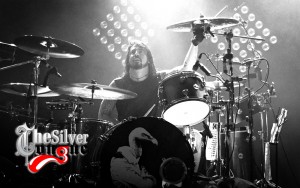 The rock supergroup consisting of John Paul Jones (Led Zeppelin), Josh Homme (Queens of the Stone Age), and Drave Grohl (Nirvana/Foo Fighters) are heading back to the studio to work on their second album.

Jones, of Them Crooked Vultures, recently told BBC 6 Music that the group is ready to resume working on putting together new material for a fresh release.

“Some stuff we’ve worked on, but we’re gonna write pretty quickly and just put it down… we may be a year or so [away from completing the CD],” he said. “It will mainly be excess material from the first album, material we started and never finished because we had to go and play the stuff we already recorded!”

Them Crooked Vultures released their debut self-titled album in November 2009. It won rapt reviews across the board, and the band has toured extensively since.

The album sold over 70,000 copies in its first week of availability in the United States, giving it the number 12 spot on the Billboard Top 200 chart.

Thanks for the report to Ultimate Guitar.