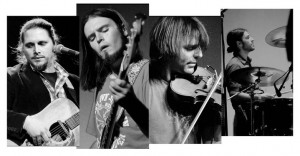 Seattle-based band Handful of Luvin’ is described on their website as “A rock quartet featuring a rocking classically trained violinist, Handful refers to their music as “fiddle driven roots rock,” and their cheerful blend of folk-rock, reggae and world rhythms, plus secondhand baroque and Celtic influences with catchy pop hooks, strongly recalls the vintage sound of Actual Tigers, the madness of Flogging Molly, and the moodier, more experimental side of Wilco.”

Handful of Luvin’ are:

TST had some burning questions that needed answering.  Here’s what the band came up with:

TST: Handful of Luvin’ is described as “fiddle-driven roots rock.” I usually try and cover my roots – but what bands would you consider your roots? Who are your influences?

David: Bob Dylan, Bob Marley, Paul Simon, Wilco and a lot of others.

TST: Andrew, you’re the fiddle player playing in a rock band. You ever get an urge to smash it onstage a la Pete Townshend?

Andew: I’ve actually been planning on getting a ratty old violin bow, and breaking it over the drums as a set closer at some point… but I have too much love for my instrument to ever smash it. I remember watching a James Bond film where he slid down a mountain on a cello – and I cringed the whole time for the instrument…

TST: Handful of Luvin’ is known for putting on a very high-energy electrifying live show. How do you try and capture that energy when recording in the studio?

HOL: This has been a hard thing for us to completely encapsulate in a recording — with the whole process of overdubbing and multi-tracking, sometimes recording all at once, and harnessing that ‘live raw’ sound is hard to cultivate. For our last album, it is definitely a lot closer to what we want to showcase to our fans – but not quite a exemplary capture of our live sound.

TST: Violinists/fiddlers in bands are becoming quite trendy these days. What’s your back-up plan for that? How are you on the upright bass?

Andrew: I’m not worried about this at all. It is trendy, but I’ve been playing in a band with the violin for over seven years – well before it started become a pretty normal rock format. Back-up plan – become more of a rocking violinist than the other players out there.

TST: Seattle is very well known for launching the grunge scene in the 90′s. What would you say the scene is known for today? How do you fit in?

HOL: Seattle currently is outputting a lot of indie underground rock acts like Fences, Hey Marseilles, Grand Hallway, Fleet Foxes, etc. which all seem to cater to a hipster audience. It also has a burgeoning hip-hop scene. Our main goal is to make audiences dance, lower their inhibitions, and have a good time. Unfortunately this is pretty opposed to the hipster scene, where there is less participation with the band.

TST: What song are you the most proud of? What song gets the biggest reaction from the audience?

HOL: “There’s No Right, There’s No Wrong” and “Pedestal” – usually get huge crowd responses. As for a track we are really proud of – that is hard to pinpoint.  “Glass Ceiling,”  ”There’s No Right,”  and “Born Lucky” (which was a huge collaborative effort for the whole band in the songwriting process.)

TST: You have the audio tracks from the late Zen philosopher Alan Watts’ lectures on some of your songs. Tell me about how “Pilgrimage (Into Chaos)” came about.

HOL: We really wanted to include an instrumental track with an audio track over the top, either a politic speech or something riveting. Andrew’s parents are both Zen Buddhists and he grew up listening to Alan Watt’s lectures regularly, so in order to find a riveting track, including a lecture by Watts seemed like a natural selection.

TST: If you collectively had a famous woman that you’d want to impress with your music, who would it be?
David: Norah Jones.

Visit Handful of Luvin’s ReverbNation page for the experience.

To read more from ALLISON, visit her blog at RadioPotato.com.