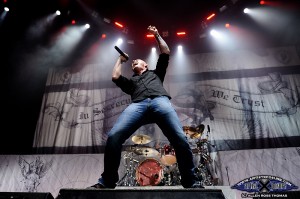 After Scott Weiland exit from Velvet Revolver in 2008, fans have been wondering what replacement could make the grade for the supergroup’s high-calibre lineup.

The first hint was in December, when drummer Matt Sorum expressed sympathy for their fan’s patience, saying “We’re tired of it, believe me. But we don’t have the ability to just jump out there with any singer. We can’t do it.”

He went on to claim that the band had found someone they “really like a lot,” though he remained tight-lipped over who it would be. “We can’t make the announcement yet because we’re ‘dating,’ you know. We haven’t consummated the relationship, we haven’t sat down this gentleman and made the agreement together.”

So when Billboard asked Corey Taylor if he was the man in question, his reply, “To be continued!” left little doubt that he could be in serious negotiations with the group.

Taylor also commented on the tragic death of Slipknot bassist Paul Gray in May last year. “We lost a huge member of our family – in my opinion the biggest – and it’s a different vibe now. So right now I’m just taking it step by step, and I can only hope that the other guys in the band are as well.”

Others known to have auditioned for Velvet Revolver are the Scars On Broadway singer Frankie Perez, Royston Langdon from Spacehog, and Myles Kennedy of Alter Bridge, who has been touring with Slash’s live band for the past two years.

Thanks for the report to Ulitmate Guitar.