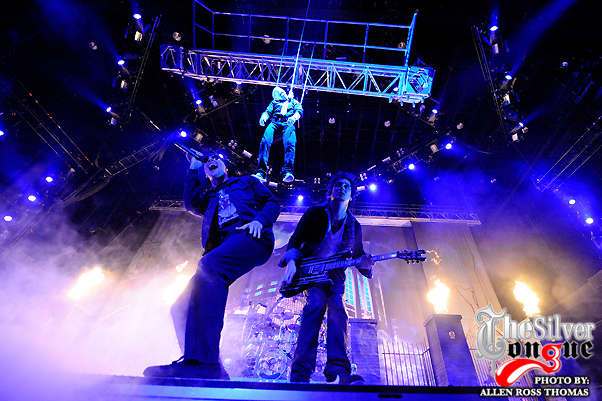 As the first album without Jimmy “The Rev” Sullivan, Avenged Sevenfold’s “Nightmare” could have been a half baked affair. The sales statistics, however, say otherwise. Blabbermouth.net is reporting that “Nightmare” has been officially certified gold by the RIAA (Recording Industry Association Of America) for shipments in excess of 500,000 copies in the United States. The album is their fourth gold selling record, following 2003′s “Waking The Fallen”, 2005′s “City Of Evil” and 2007′s self-titled offering.

Also awarded a plaque alongside the band was former Dream Theater drummer Mike Portnoy, replacing Jimmy “The Rev” Sullivan, who passed away in 2009. Portnoy, who left Dream Theater in September of last year, played drums on several tracks on the album and performed live on the second leg of the band’s 2010 tour. Upon the receipt of his plaque, Portnoy had the following to say: “Thanks so much to the Avenged Sevenfold fans for making me feel so welcome and loved during my time with the band.” While the drummer had extended an offer to stay with Avenged Sevenfold full time, the band instead chose Arin Ilejay, formerly of Christian rock group Confide, to fulfil their upcoming tour dates.

According to bassist Johnny Christ, in an interview with U-G in 2010, “Nightmare” was originally supposed to be a concept album, before the tone changed at the news of Sullivan’s passing:

“We definitely had made the decision that it was going to be a concept record. We wanted to have a dark concept record, sort of like “The Wall” or “Operation: Mindcrime”… Then lyrically it took a different turn when Jimmy passed. The lyrics then became mostly – not 100 percent – but mostly to do with his death and his life.”

Avenged Sevenfold are currently out on the road with Three Days Grace, Bullet For My Valentine, and Sevendust as part of the Welcome To The Family tour.

Thanks for the report to Ultimate Guitar.