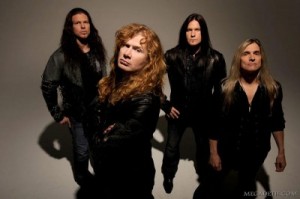 Megadeth has tapped Johnny K (full name: John Karkazis; Disturbed, Sevendust, Machine Head, Staind) to produce the band’s new album, tentatively due this fall via Roadrunner Records. The drum tracking for the CD is scheduled to begin next week, with the entire recording process expected to be completed by the time the group hits the road this summer as part of the Rockstar Energy Drink Mayhem Festival with Disturbed and Godsmack.

Although British producer Andy Sneap – who helmed Megadeth’s 2009 album “Endgame” – was initially supposed to reteam with the band for the forthcoming album, has was forced to pull out of the project due to scheduling conflicts. He explained in a recent interview with Ultimate-Guitar.com, “I’m doing another project that I also play guitar in called Hell and we’re doing some summer festivals this year so it kind of cut into the whole schedule that was planned with Megadeth.”

When asked about what fans can expect from Megadeth’s next album, bassist David Ellefson recently told UGO, “We are working on it now so it’s a bit early to encapsulate what the final will ultimately sound like. I think we know the punch and impact we want it to have but also not be afraid to let new ideas develop, too. Just know it will be heavy, hooky, and have the trademarks you’d come to expect from us.”

Megadeth mainman Dave Mustaine said in a recent interview that the band’s new album is shaping up to be “more like ‘Endgame’, maybe sticking in that vein and going a little forward toward what I like.”

Speaking to Australia’s FasterLouder, Mustaine said he preferred “Endgame”‘s more aggressive moments. “We were forced, in a way, to have to do certain things and it’s really easy for me to blame somebody, but at the end of the day it was my fault, I could have said no, but I didn’t”, he said. “I was nervous that we were going to end up getting kicked off the label. I figured I would rather go underground and play what I like, and not sell as many records, but still be able to look myself in the face in the morning.”

“Endgame” has sold around 150,000 copies in the United States, according to Nielsen SoundScan.

Megadeth’s platinum-certified 1986 masterpiece, “Peace Sells… But Who’s Buying?”, has been digitally remastered for the first time and expanded for a special 25th-anniversary release in multiple configurations. It will be released July 12 by Capitol/EMI.

All of the versions, including a 2CD lift-top box, digital album and a deluxe 5Disc+3LP box set, contain a previously unreleased 1987 concert from the band’s first world tour and new liner notes written by Mustaine and Metallica’s Lars Ulrich.

Thanks for the report to Ultimate Guitar.﻿