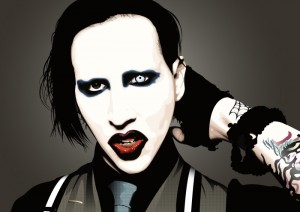 Marilyn Manson has released a 26-second video teaser for what he calls “an undisclosed song with an unreleased title”. You can check out the clip below. In addition, the singer has posted the following message on his website to accompany the track, which may or may not be titled “I Am Among No One”:

“Brave Now World. Don’t ever believe what you read, especially if you are illiterate. Art will be the burning churches, burning beds, burning witches, burning bridges, burning Cadillacs, burning forests, burning flags, and the burning human remains that are the evidence of the burned books, filled with stories of our razor and rope burns.”

I am among no one (excerpt from an undisclosed song with an unreleased title) from Marilyn Manson on Vimeo.

“But we will not be the ashes. We will not be cremated, we will cauterize our wounds. We never wanted our wings anyway.”

“We are more than the flightless creatures, that are always expected to rise from the bonfire. These are barbecues for trembling, idiot arsons who pretend to be America’s Vatican in whatever ‘ism’ is easiest to swallow. After the horrid blowing jobs, they expect us to fight against each other to obtain the security of willing slaves.”

“We do not walk among them. I am among no one.”

Marilyn Manson is currently in the studio with his bandmates finishing his eighth studio album, set for release later in the year through Cooking Vinyl Records.

Thanks for this report Ultimate Guitar.

Previous Entry: Mastodon in the Studio With Producer Mike Elizondo Recording “Crack the Skye” Follow-Up
Next Entry: Linkin Park Celebrate the Worldwide Release of the New Transformers Movie with Outdoor Show in Moscow