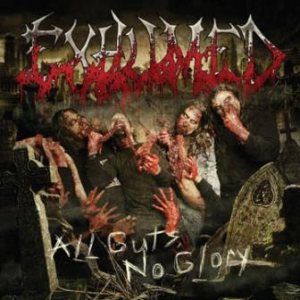 Exhumed has been exhumed! And believe it or not, this might be the best music the San Jose band has released. That’s saying a lot, given past gorefests like 2003′s “Anatomy is Destiny.” And despite this album’s title, it is indeed glorious. In the face of a metal scene whose borders are becoming increasingly porous, with genres misceginating as casually as modern teens, Exhumed cling tightly to their roots on their fourth full-length, sticking to their guns and sharpening the blood-stained weaponry that is their sound. The breakneck pace of the album will savage you into a submissive daze– this is one for the necromaniacs. There’s no filler here, and the pace is unrelenting. Go ahead and get the mental comparisons to Carcass out of the way now.

Exhumed seem to be following in Autopsy’s footsteps. The latter reformed in 2009. You would expect that the time away would dull their chops, but it’s the opposite. Exhumed is hungrier than a zombie horde– voracious, in fact. Perhaps both classic bands arose from the dead in order to school the modern death metal scene. The message is clear: you don’t need much more than the time-tested main ingredients. But the important thing, Exhumed tells us, is to brutally layer these ingredients. Exhumed was never subtle, and their ability to hammer you over the head is one of their best qualities. This album maintains their traditional double-vocal attack– check the brutal, strangled scream at the end of “I Rot Within” –as well as Matt Harvey’s stacked guitar tracks, his tone pure onslaught, as ever. And the lyrics are not about marshmallows and ponies…

The band’s music isn’t incredibly technical, so the layering, as well as the speed of the tracks, is crucial to their sound. It isn’ a complex vocabulary, but it’s intense and effective. This is in fact the first offering of all-original music from this incarnation of the band, former drummer Col Jones replaced by Danny Walker of Phobia, Jesuit, and Bad Acid Trip fame. Walker never fails to impress in his precision and ability to follow the changes in pace and rhythm. I don’t even want to know the beats per minute of “Death Knell.” Matt Harvey’s screams and yelps on the album are joined by bassist Leon del Muerte’s gutteral vocals (what an appropriate surname!), and their synergy is undeniable. However, I do wish del Muerte’s bass playing had more of a presence on the album.

The eponymous intro begins with ominous guitar wails before launching into a rapid, chugging instrumental, with a deranged, squealing guitar solo toward the end. “As Hammer to Anvil” follows it, unrelenting in its brutality and sounding much like its title. The anvil is your skull, the solo shredding you for good measure. “Your Funeral, My Feast” opens with Harvey and del Muerte trading tortured growls for the verses and growling on top of each other for the chorus, a mainstay of the album. The solo in the middle is like a hand reaching out of a raging river of blood. Then comes the breakdown, like a sanguine waterfall, del Muerte providing his best vocal performance on record. “Through Cadaver Eyes” is one of the densest songs on here– careful, you don’t want to get whiplash headbanging so hard –and the evil is counteracted by Harvey’s epic, Swedish-influenced bridge, the song completely changing pace. It threatens to return to darkness, but Harvey keeps soaring into a solo, before the gore finally overcomes.

The pace doesn’t slow, either. On “Death Knell” Danny Walker gives us his version of a gravity blast. Harvey’s excellent guitar leads during bridges and solos provide a foil to the brutality throughout the record, which shows two things: as far as gory death metal goes, this band’s got class, but it also means business. And even as the songs begin to blend together into one dark, furious blur, the band is never short on unexpected musical twists. Not all of the solos are melodic. The solo on “I Rot Within” is garbled and pained, before it emerges as a haunted bridge counting out the beats, propelling the song into a short section which is one of the most brutal on the album, before closing with the aforementioned bloodcurdling scream. The solo on “Necrotized” seems to be influenced by Death somewhat, among other disparate influences. Of course, they save perhaps the most brutal performance, “So Let It Be Rotten… Let It Be Done,” for last. It’s as if the band is trying to tear the fabric of time with their intensity.

Like all good goregrind albums, this one is short– an intro and ten tracks: 36 minutes long, and roughly ten minutes shorter than “Anatomy is Destiny.” The band has whittled down their sound to essentials. This record goes for the throat, pouncing, and the melodic elements of Harvey’s wonderful guitar intuitions fight to cram themselves into these tightly-packed beasts. But his solo lines do manage to appear consistently like a ray of moonlight through a cloud of smog and corpses, sometimes betraying a European influence and sometimes simply emanating even more evil. His tone throughout is crisp, betraying the hands of a veteran. Indeed, the record is consistently and professionally brutal. And like all good goregrind albums, it leaves you in a state of exhausted euphoria at the end, your ears pulsating with the foreignness of silence, which perhaps comes as a much-needed respite, even though the first thing you want to do is replay the album.