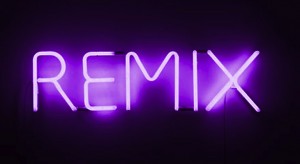 Thee Lovely Hand announces the release of their remix of Darwin Deez’s “Radar Detector.” Fans of the musician – known for his distinctive dark curls and infectious dance routines – know the song well: It is a bouncy, lively hit that continues to be relevant despite being released more than a year ago. One of a number of Deez’s hits, “Radar Detector” was performed across the United States and launched a plethora of homemade music videos. If there’s one thing Darwin Deez can do it’s make a person dance.

The remix is a slower version of the song, reminiscent of classic Balearic-genre tunes by the likes of DJ History and The Cure. Its dreamlike qualities reveal a different side of the song, one that was before masked by an undeniable energy. That energy isn’t so much as gone now as redirected to an electronic beat that, while not completely matching up to Deez’s vocals, complements the song in a way that explores and deepens its possibilities.

Thee Lovely Hand is made up of LCD Soundtrack cohort Tim Goldsworthy and Bruno Ellingham, producer and sound engineer of New Order and Goldfrapp fame. Their remix coincides with Darwin Deez’s latest national tour, which runs through July and hits venues in California, Pennsylvania, Washington, D.C., New York and Massachusetts.