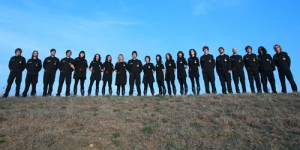 Since the release of The Fragile Army four years ago, not much has been seen or heard from The Polyphonic Spree.  The robe-clad Texas group, currently 21 strong, have decided to give us a small sampling of their upcoming LP, which has yet to be titled.  This sampling, however, comes at a small price.  In an attempt to utilize present day technology, The Polyphonic Spree are selling their new single in iPad app form.  For $1.99, fans can roam through an interactive video, all the while getting to hear the new single.

So if you’re wanting to hear the single, go here and buy the app.  If you don’t have the means (i.e. appropriate Apple product) for this release, then check out the sampler video below.  Not only will you hear bits and pieces of the new single, but can also see some of the clips from the interactive video.

Previous Entry: Watch This: Radiohead’s Glastonbury Performance in HD
Next Entry: Incubus Responds to Religious Protestors in the Philippines