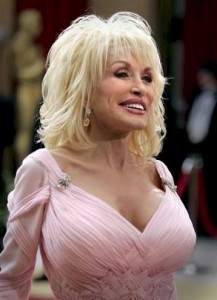 Dolly Parton has no intention of slowing down.  The 65-year old country music legend has stated that she has no plans to retire in the near future and that she will only stop performing when she passes away.

According to Music-News Parton states:  “I plan on falling dead on stage someday, but not yet.”

Parton, a multi-instrumentalist singer-songwriter has also expressed a desire to collaborate with Lady Gaga, admitting that she can relate to the eccentric pop superstar.

“I’d love to sing on one of her records’ wouldn’t that be cool?  I was outrageous long before she was.  I dressed crazy before she was even born.  I can definitely relate to what she’s doing.”

Even though Parton has open doors for many female artists through all her achievements over the years, she insists she didn’t set out with those intentions.  She told Elle Magazine:  “I didn’t do this with the idea of pushing boundaries.  It just so happened that I was a woman.  I felt I had a lot of talent and as much right to use it as any man.  I had confidence in myself as a woman as well as a writer and a singer so I thought; well I can use all my goods.”