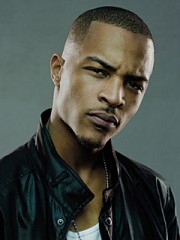 T.I. is a free man. The Grammy award winning rapper was released this morning from the Forrest City Correctional Institute in Arkansas.

T.I., who’s real name is Clifford Harris Jr, served 11 months for parole violation after he was arrested for drug possession in 2010.  At that time he was currently on probation due to a 2009 federal gun conviction.

He’ll now spend a month in a halfway house or in home confinement.