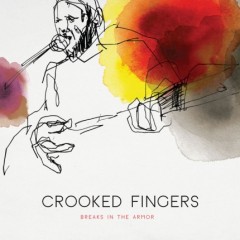 Over the past three years, not much has been heard from singer/songwriter Eric Bachmann, who typically works under the name Crooked Fingers.  The Archers of Loaf (1991-1998, 2011) frontman who had a solo career just as expansive and successful (if not more) as his prior engagement was beginning to hint towards a musical hiatus.  After moving to Taipei to teach English as a second language, fans worldwide began to suspect that Bachmann’s intention to retire from music was actually true.  This, however, was not the case, and Breaks In the Armor is the counter example.  Prior to the new album, Crooked Fingers released five full-length albums and two EPs.  Outside of the Crooked Fingers moniker, Bachmann also released a solo record in 2006 under his legal name via Saddle Creek (Bright Eyes, Two Gallants, etc.).

All this history was necessary to explain for this reason alone: Bachmann has put out a shit load of music.  Such a behemoth of a catalog, however, does not always hint towards consistent quality.  Usually after so many releases, even the most lukewarm of fans can notice token declines in seasoned songwriters.  Although not always critically acclaimed, up until this point all of Crooked Fingers‘ releases have been given commendable reviews.  After becoming closely acquainted with Breaks in the Armor, it is certain that both recognition and applause are in order.

The world of singer/songwriters can be best represented by Hieronymus Bosch’s The Garden of Earthly Delights.  Sometimes the pure minimalism and craft of an artist allows you to sink into whatever furniture you are on and relish in the moment that they’ve created…and other times you feel like you’d rather be eaten by a demonic bird.  Whether you’re prancing around with unicorns by a stream or being crucified on a harp (please see the painting to make sense of this metaphor), the fact remains that the label ‘songwriter’ has no specific connotations.  When I call Bachmann a true songwriter, I mean it in the most positive and left-field way possible.

This can be explicitly seen in his dynamic use of rhythm in certain songs.  While most songwriters are amateur sailors caught in the vicious whirlpool of 4/4, Crooked Fingers has set sail for brighter and better shores.  In songs such as “Typhoon” and “Went to the City”, Bachmann begins with steady 3/8 beats but will jump to 2/4 with barely a moment’s notice.  Not only is this a little treat for fans versed in music theory, but also gives Crooked Fingers an outlet to create melodies unrestrained by the structure status quo.

Aside from Bachmann and his guitar, the album is sprinkled with drums and the vocal talent of Liz Durrett.  Both these elements add the perfect amount of depth needed to prevent the album from appearing too refrained or subtle.  Durrett’s vocals float effortlessly above Bachmann’s wisely-chosen and thought-out lines, allowing both parts to complement one another.

Never has a record ever made me feel as if I know an artist so well, but at the same time not being able to put my finger on how.  A David Lynch of music (without the surreal terror), Crooked Fingers creates emotional soundscapes where the audience must fill in the gaps.

“Outside your window I waited for you / You didn’t come, you never do / Yesterday baby, I told you the news / They meant no harm, they never do”

His lyrics paint portraits only half complete.  As the album cover insinuates, the listener will only get an impression of Bachmann’s psyche.  Right when the pieces of the puzzle are coming together, the ever-present shadow of ambiguity creeps back in.  It’s intimate, mysterious, and humbling all at once.

Breaks in the Armor is an album that is as definable as undefinable, as poignant as it is joyful, and as reflective as it is concise.  Even if the concept of a songwriter brings wretchedly mediocre thoughts to your head, rid yourself of preconceived notions.  Make sure to give Bachmann’s material a chance, you will not be disappointed.

Top tracks include “Bad Blood”, “Typhoon”, and “Went to the City”.