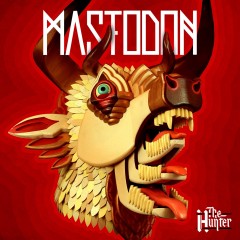 Okay, I’ll say it: Mastodon are the Radiohead of heavy music. Like those alternative rock mavericks, Atlanta’s most acclaimed metalheads take every release to push not just their own music, but their chosen genre, ahead. The Hunter, the band’s just-released fifth album, is yet another step forward: uncompromising, unexpected, unrelenting – in other words, classic Mastodon.

Two things set off The Hunter from the rest of Mastodon’s discography. It’s the first album where they’ve worked with producer Mike Elizondo, who isn’t exactly known for his work in the metal genre: Elizondo got his studio stripes under Dr. Dre, and is famed for helping create hits for artists spanning the likes of 50 Cent, Eminem, Nelly Furtado, Carrie Underwood, and Fiona Apple. Yes, Elizondo did helm the last Avenged Sevenfold album, but that factoid doesn’t prepare the ears for his work here: he’s captured the Mastodon sound through and through – and if anything made it leaner, meaner, and stealth like a missile.

Mastodon’s previous album Crack The Skye teemed with epics like the thirteen-minute “The Last Baron,” and only one song came in under five minutes long. By contrast, The Hunter has only two songs barely lasting over five minutes: its two elegies, the looming title track and “The Sparrow.” But parsing mere song lengths can be deceptive; Mastodon evades such simple analysis. Yes, the material on The Hunter proves some of the most immediate in Mastodon’s history, yet even in its short sharp shocks the tracks prove as proggy and epic as ever – just more concentrated as such. Like DMT, each individual song creates a hallucination that feels like it’s lasting an eternity, even if it’s over in the blink of an eye. Take caustic opener “Black Tongue,” with its armada of rolling, slippery drums, discordant riffs, and soaring harmony solos: its three and a half minutes capture more parts and ideas than most groups can fit into an entire album. “Spectrelight” is a more expected Slayer-style thrasher, yet with cosmic overtones (and guest vocals via Scott Kelly of metal mavericks Neurosis, both a frequent collaborator and clear influence); “Spectrelight” just proves, though, that when Mastodon goes basic, it just distills their intensity. “Blasteroid,” meanwhile, clocking in at two and half minutes, melds staccato hardcore stop-starts with Rush-like passages of lyricism and undeniably catchy vocals. There’s probably no song like it in Mastodon’s catalog, yet it remains undeniably touched by their sonic fingerprint.

The other key difference from the band’s previous work is that The Hunter is not a concept album per se. This allows Mastodon to get almost, well, silly at times. The interstellar overdrive of “Stargasm” accompanies an ode to, um, fucking in space; “The Creature Lives,” meanwhile, essays a monster-movie narrative over Pink Floydian synth psychedelia. But just as Crack The Skye was haunted by the suicide of drummer Brann Dailor’s sister Skye, death hangs over the proceedings here, proving an inescapable character in the Mastodon narrative. The title track is inspired by the brother of guitarist/vocalist Brent Hinds, who passed suddenly from a heart attack on a hunting trip; it’s a tragic ballad distinguished by odd, startling turns – it’s maybe Mastodon’s version of “One,” but still defiantly strange and unsentimental in its homage. The musical ghost of Cliff Burton also gets evoked in album closer “The Sparrow,” a memorial to the wife of the band’s accountant, who also died without warning. “The Sparrow”’s haunting acoustic guitar and subtle symphonic swells grow in a soaring yet subtle build to a truly unhinged guitar solo; it all comes together to convey how Mastodon aren’t afraid of melody, but they don’t fear screwing with it, either.

“The Hunter” and “The Sparrow” show Mastodon unafraid to plumb their emotional and psychological states; this dimension is what gives their music an emotional appeal beyond mere sludge bombast. Indeed, there’s a cinematic aspect to Mastodon’s music, but the movie that’s playing is clearly unspooling only in the band members’ heads. According to the band, much of The Hunter was written during a tour with Alice In Chains, and that’s not surprising considering the results: the songs here often are enriched by eerie vocal harmonies that recall those metal forefathers, as well as the feeling of loss due to mortality and addiction that permeates Alice’s proto-grunge grooves. Those harmonies often add a layer of catchiness, but The Hunter is no obvious move into commercial waters; it’s too wild and unpredictable for that, full of jagged shapes and brooding passion that the more melodic elements only emphasize. This is no one’s template for sell-out; instead, The Hunter coalesces as the sound of band pushing themselves into brilliant, uncharted frontiers of idiosyncrasy and innovation – just like the last time, and most likely the next one, too… This isn’t a mere stepping stone to greatness, but another of Mastodon’s boulders of innovation; what in due course proves revelatory is that, from listening to The Hunter, it’s clear they’re still not yet done scaling the mountain.

Matt Diehl is the author of four books: his most recent is Drinking With Strangers, the memoir of Butch Walker, which Diehl co-authored and will be published by William Morrow in late October. Elsewhere, Diehl’s writing has appeared in the likes of Rolling Stone, The New York Times, Los Angeles Times, SPIN, W Magazine, and Interview, where he is Contributing Music Editor. He lives in Los Angeles, California.

Previous Entry: Capital Punishment, The Most Premeditated of All Murder
Next Entry: Video: Coldplay Covers R.E.M. at Music Midtown